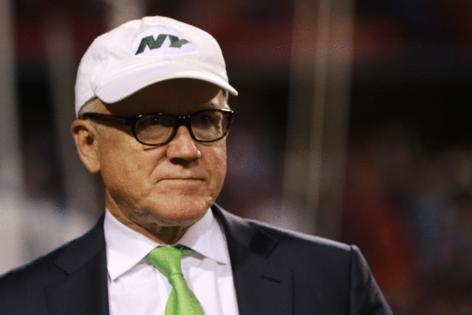 NEW YORK — Despite the Patriots' 54-13 obliteration of the Jets in Week 7, Jets owner Woody Johnson still believes in the organization’s new infrastructure.

“I have unwavering, steadfast confidence in Joe [Douglas], Robert [Saleh] and the coaching staff,” Johnson said Tuesday. “I’ve been around for going on 22 years, with my little absence that I had recently, and this is a good group. So we will get it right.”

Johnson — who returned to helm his struggling football team earlier this year after four seasons away while serving as President Trump’s ambassador to the United Kingdom — spoke to the media at the start of the NFL owners’ meetings in Manhattan.

Johnson labeled the beatdown from their arch-rival last weekend “frustrating,” but said his focus has turned to the red-hot Cincinnati Bengals (5-2) who crushed the Baltimore Ravens, 41-17, in Week 7 and are tied for the best record in the AFC. The Jets are 1-5 under Saleh, who was hired while Woody’s brother Christopher was still running Gang Green and is a first-time head coach. Douglas was hired in June 2019.

In the two seasons with Adam Gase as head coach the Jets started 1-8 (2019) and 0-13 (2020). But regardless of which Johnson is running the show, the Jets have been one of the worst-run franchises in the league and have the longest active playoff drought (10 seasons and counting).

The Jets’ latest embarrassing start is due to another inept offense and struggling defense. They rank in the bottom five in scoring offense and points allowed. Their offense hasn’t scored a point in the first quarter through six games.

But Johnson still believes in the direction of the long-term plan.

“Just talking to the leadership with Joe and Robert, talking to them and seeing how their plans are put together, how they’re deep thinkers,” Johnson said. “I think they want to do things like establish a culture and they’re getting the right players in the right positions.”

Johnson might have complete faith in this leadership team, but he might be one of the few.