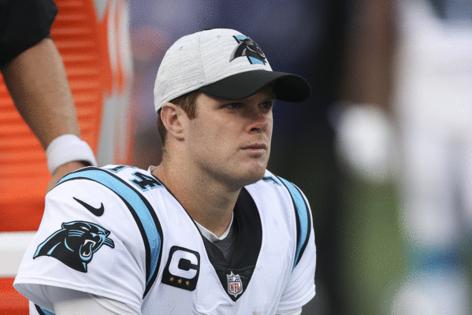 As usual, my mother said it best on Sunday during the Panthers’ 25-3 loss to the New York Giants.

She knows ball but this wasn’t a eureka! moment. Instead, she stated the obvious while unknowingly indicting coach Matt Rhule and GM Scott Fitterer’s Sam Darnold experiment.

So much went wrong for Carolina against the Giants’ 27th-ranked defense. Before pulling Darnold for backup P.J. Walker, the Panthers punted seven times, surrendered a safety and threw an interception. Those shortcomings don’t all fall on Darnold but plenty does. He’s playing like he’s seeing ghosts again. Yet this has nothing to do with Bill Belichick or Halloween.

It’s OK if Panthers fans are more scared of their current quarterback situation than of Michael Myers. I’m about to sound like the new guy but don’t lose hope yet. Instead, let’s unpack why Darnold struggled mightily, what it means for the Panthers’ offense and theorize whether this is fixable.

Sam Darnold is not trusting his eyes

Because the NFL’s All-22 film isn’t available until 24 to 48 hours after games, we’ll be reviewing tape from Week 5 and 6. After re-watching those games and comparing them to Sunday’s performance, it’s clear Darnold hasn’t been comfortable since Christian McCaffrey exited in Week 3.

He’s playing skittish. In his first three games, Darnold averaged nearly 300 passing yards. He accounted for six total touchdowns and only two turnovers. Over the past four weeks, his yardage average dropped by 100 and his turnovers quadrupled.

Which is why it doesn’t matter what losing-streak Darnold tape we watch. In fact, going backward helped solidify trends. For example, this incomplete play-action pass versus the Vikings highlights his undisciplined eyes.

Carolina faced a 2nd-and-15 from their own 32. Under center in a balanced formation (two condensed receivers and two tight ends to each side), Darnold (14) motioned tight end Tommy Tremble (82) behind him. Notice how Tremble slowed before the ball was snapped. That’s poor timing. It lessens the run fake. Vikings middle linebacker Eric Kendricks (54) hardly steps toward the line of scrimmage and instead accurately diagnosed a throw.