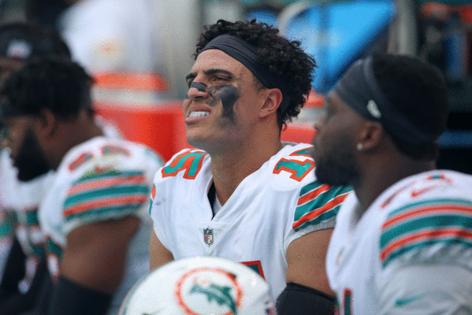 Nevertheless, the savvy veteran was still called on in emergency game situations when clutch play was needed and retained his alpha male status in the locker room, which is why he was given the Leadership Award by his teammates at the end of the 2020 season.

Ereck Flowers taught Miami’s young offensive linemen how to be pros on and off the field, and former Dolphins center Ted Karras taught them how to study film and made proper in-game protection calls.

Former Dolphins safety Bobby McCain held the secondary together, making all the coverage checks and calls, keeping the unit on one accord.

Linebacker Kyle Van Noy made many of the front-line checks and got everyone in position. According to team sources, Van Noy also routinely challenged the coaching staff about troublesome game plans and in-game calls, keeping them accountable to the players.

If we’re doing a deep dive on what’s gone wrong this season with the Dolphins — attempting to explain how a 10-6 team in 2020 delivered a 1-6 start in 2021 — we have to bring up the purge of leaders that took place this offseason.

As a free agent, Fitzpatrick moved to Washington, where he was named the starter before injuring his hip in the season opener, and Tagovailoa has struggled to come out of his shadow as a leader, not player.

“He’s great, and he’s trying,” one Dolphins player said about Tagovailoa, who owns a 7-6 record as Miami’s starting quarterback heading into Sunday’s game against the Buffalo Bills (4-2). “But it’s not Fitz.”

Releasing Van Noy and McCain, trading away Flowers to move up 14 spots in the seventh round of the draft, and not re-signing Karras created cap space. But their departures left leadership voids on units that have struggled this season.

Miami’s linebacker unit has have been a mess, and Jaelan Phillips has struggled to replace Van Noy. The secondary constantly features breakdowns, although Jevon Holland has shown early promise as the starting free safety. The offensive line is on its third starting center and lacks a quality NFL starter like Flowers, who has started every game for Washington this season.