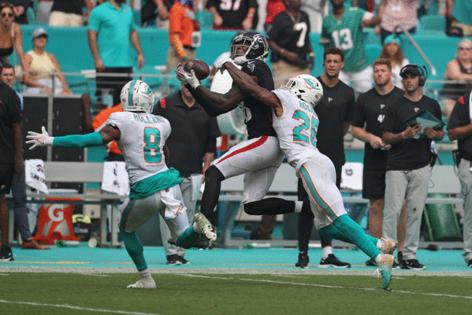 This Miami Dolphins season is swaddled in such stink even the good news smells. Even the rare draft choice that looks right isn’t right on closer inspection.

The various manners this front office has bungled first-round picks is reminiscent of an old actor, Fred MacMurray, summing up the various ways he did away with frequent co-star Barbara Stanwyck in movies: “Once I sent her to jail, once I shot her, once I left her for another woman and once I sent her over a waterfall.”

Let’s start here on that last idea: Jaylen Waddle is everything the Dolphins wanted. The speed. The ankle-breaking change of direction. He caught six passes Sunday against Atlanta and each went for a first down. He’s a good rookie.

But again: Even the good news isn’t good news on this franchise. For starters, he wasn’t the guy on the other side, who the Dolphins passed on in the draft. Atlanta’s Kyle Pitts is already great. He was the player of the game Sunday, catching seven passes for 163 yards.

Pitts became the first rookie tight end to have back-to-back 100-yard games since 1970. That’s cheating a bit, because the 6-foot-6 Pitts isn’t really a tight end. He’s a No. 1 receiver, a weapon the Dolphins have lacked for years.

“That’s why we took him with the fourth pick of the draft,’’ Atlanta coach Arthur Smith said after a 30-28 win against the Dolphins.

That’s just half the cup of bitterness, too. Ja’Marr Chase is the other half. He caught 201 yards of passes Sunday for Cincinnati. He now has more receiving yards through seven games than any rookie in NFL history.

“He’s the player we thought when we took him that high,’’ Cincinnati coach Zac Taylor said last week of the No. 5 pick.

The Dolphins originally had the No. 3 pick last offseason. This is why the good news of Waddle isn’t good enough. Again, that’s no strike against him. Again, it’s another in the line of strikes against this Dolphins’ front office, against their faulty decisions, against a rebuilt roster that looks all wrong.