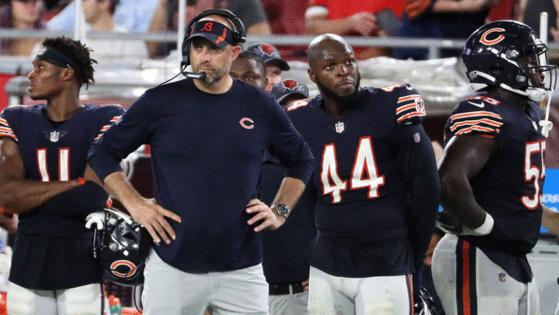 Sunday’s 38-3 loss to the Tampa Bay Buccaneers at Raymond James Stadium fell into many categories. Lopsided, for one. It was the biggest blowout defeat for the Bears since an infamous 55-14 loss to the Green Bay Packers at Lambeau Field seven years ago.

Ugly? Yep, that description fits, too, after rookie quarterback Justin Fields turned the ball over five times and Bucs star Tom Brady fired four touchdown passes in one of the breeziest victories of his career.

Bears linebacker Roquan Smith even called the defeat “embarrassing,” which probably was a generous adjective to pick. And Fields admitted he had no idea what emotions were bubbling inside as his football career hit an unfamiliar low point.

“I’ve never been in this position where I’m losing,” he said. “So I don’t know how to feel.”

But surprising? Nah. Sunday’s blowout wasn’t astounding in the least. Not with the Bears’ constipated offense attempting to keep pace with a far superior unit but falling behind by 32 points before halftime.

Not with the Buccaneers looking every bit capable of winning a second consecutive Super Bowl and Brady throwing for more touchdown passes in the first half than the Bears have all season.

Not with Bears coach Matt Nagy still searching high and low for any kind of spark to get his squad into a respectable groove yet not finding a way to get his offense into the end zone even once.

Perhaps fittingly, the final fizzle in Sunday’s dud was a 4-yard check-down pass from Fields to backup running back Ryan Nall. With the Bears down by 35 points and at the Buccaneers 29. Why not, right?