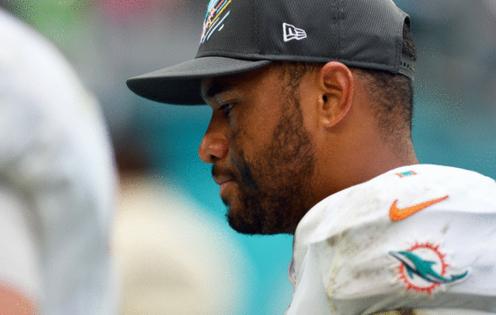 It may already be too late for Tua Tagovailoa, if the reports are true. It may be too late for the Miami Dolphins to not do something stupid by giving up on their second-year quarterback much too soon and trading for Deshaun Watson despite the monumental risk and cost of that, not to mention the soul-selling morality of it all.

But if it is not too late yet, well, Tagovailoa showed Sunday at Hard Rock Stadium how good he can be, and how dumb it would be to not see that, to not give the promise of it a fair shot.

It was the stage for him to win over supporters and chase away doubters. To build faith and trust that he is the man to lead this franchise long term.

And he did, even in defeat, in a 30-27 loss to the Atlanta Falcons decided on a last-second 36-yard field goal — after Tagovailoa had handed his defense the lead with two minutes to play.

“To give us a late lead, that’s what you’re looking for from your quarterback,” coach Brian Flores said afterward. “We needed to stop ‘em there at the end. We didn’t do enough. When we had to play our best [defensively], we didn’t do that.”

One minute there was jubilation from the home crowd of 62,739.

The next there was the void of it as Miami fell to 1-6 with a sixth consecutive defeat.

Miami needed the lift but was denied it, one day after the equally needy Miami Hurricanes upset North Carolina State, 31-30, on the same field.

Tagovailoa would finish with 32 completions in 40 attempts for 291 yards, four TDs and two interceptions.

He rallied his team from behind and got the lead late, only to watch his defense be unable to stop Matt Ryan.