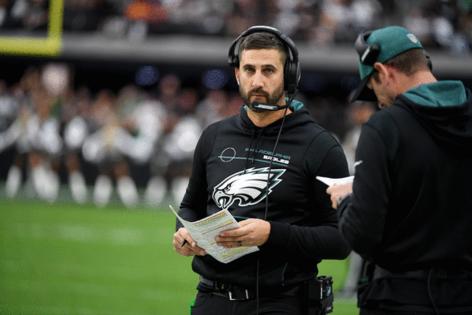 Turns out, the extra time didn’t mean much for the visitors, who were embarrassed in Sin City. The Eagles were on the wrong side of a 33-22 smashing Sunday. They return to Philadelphia with a 2-5 record.

Throughout the season, defensive coordinator Jonathan Gannon has struggled to make in-game adjustments against veteran signal callers. Raiders quarterback Derek Carr was the latest example to carve through the Eagles.

Even without top tight end Darren Waller — who sat out with an ankle injury — Carr and the Raiders moved the ball at will versus Gannon’s defense. Carr repeatedly attacked the middle part of the field and stunned the Eagles linebackers with quick darts in the intermediate passing game.

Carr’s first-half stat line: 21-of-23 completions and 215 passing yards. One of his two incompletions occurred on a tipped-ball interception from cornerback Avonte Maddox.

Gannon and Co. failed to make the proper adjustments at halftime. After the Eagles failed to convert a surprise onside kick attempt, the Raiders quickly maximized on the short field and put the game out of reach with Kenyon Drake’s 4-yard touchdown rush.

Carr finished with 31 of 34 completions, 323 yards and two touchdowns, setting a career high for single-game completion percentage. Three incompletions won’t cut it by any standard in the NFL. It has become apparent that improving the defensive personnel needs to be a priority in the offseason. For now, more harsh conversations are bound to happen from Nick Sirianni, Gannon and the rest of the coaching staff.

Miles Sanders suffered an ankle injury and did not return.