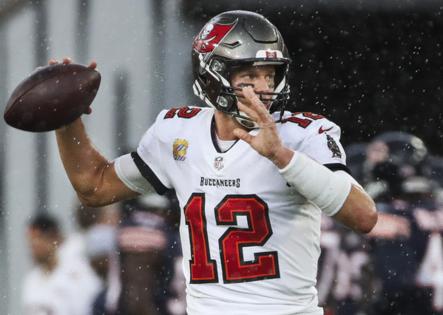 TAMPA, Fla. — Mike Evans didn’t know. After catching a 9-yard touchdown pass from Tom Brady in the first quarter, the Bucs receiver ran over to the wall in the north end zone and handed the football to a fan wearing his No. 13 jersey.

Later, he was shocked to learn the ball he gave away was the 600th career touchdown pass of Brady’s career. A couple minutes later, a Bucs official exchanged that priceless souvenir for another football with the promise of more memorabilia to come.

That little scene was emblematic of Sunday’s 38-3 rout of the Bears on Sunday. The Bucs kept getting the football back for Brady and he kept doing miraculous things with it.

Brady threw four touchdown passes, including three to Evans, to lead the Bucs to a franchise-best 6-1 record to start the season.

With almost every Brady pass, history is made. In the win at New England, he set the NFL career passing record. On Sunday, the milestones continued to fall.

Evans’ three touchdown receptions were the most in the first half by a player in club history, tying his own record he against the Giants in 2019.

Brady finished 20-of-36 for 211 yards with the four touchdowns and no interceptions. He and the Bucs took advantage of three short fields to take a 21-0 lead in the first quarter.

Rookie Jaelon Darden returned a punt 43 yards, the longest of the season in the NFL, to set up Leonard Fournette’s 2-yard touchdown run.

Then came the interception by Delaney, who returned it 26 yards to set the Bucs up at the Chicago 40. Brady connected with Chris Godwin for 21 yards and then threw a 4-yard scoring pass to him for a 14-0 lead.

Fields had no chance against the Bucs’ pass rush. Barrett sacked Fields and forced a fumble that was recovered at the Chicago 35-yard line. Five plays later, Brady threw reached the 600 touchdown pass plateau with the 9-yarder to Evans.

Fields lost another fumble when he was sacked by Pierre-Paul. Barrett recovered but fumbled forward before linebacker Devin White pounced on the football.

Even Brady’s misses were historic. After his 600th touchdown, he missed on his next six pass attempts, tying for the most consecutive incompletions of his remarkable career.

The Bears’ only score came on a 28-yard field goal by Cairo Santos.

Brady’s fourth touchdown pass was the third caught by Evans. The Bucs could have scored more. Ronald Jones was stopped on fourth and goal from the 1-yard line, and Ryan Succop missed one of his two field-goal attempts.