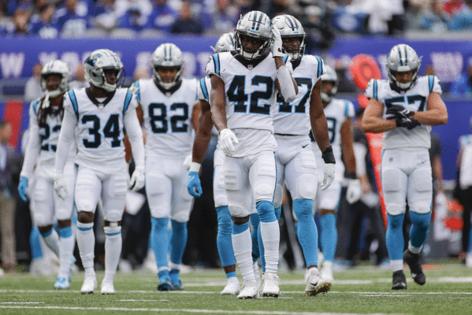 They had lost their third straight game and were spiraling. Sunday’s game against the struggling and beat-up New York Giants (2-5) was supposed to be an opportunity for the Panthers to get back on track and finally snap their three-game skid.

But the Panthers’ stumble stooped lower Sunday. They’ve lost four straight now after their 25-3 defeat to the Giants. What was once a promising start to a season with playoff aspirations is turning into a disaster.

The Panthers (3-4) benched starting quarterback Sam Darnold in the fourth quarter of Sunday’s game in favor of PJ Walker. Darnold has been dreadful the past four games, turning the ball over eight times (seven interceptions, one fumble), and he played poorly again Sunday. Before he was benched, he was 16 of 25 for 111 yards and an interception.

Rhule said he benched Darnold because he felt Walker could provide them a spark. Unfortunately, no such spark happened. Walker was also ineffective, completed 3 of 14 passes for 33 yards.

Without Christian McCaffrey, the Panthers have gone from a solid offense to an incompetent one. They’ve regressed offensively, and the onus falls on Rhule and the coaching staff for not having fixed it.

In the Panthers’ three wins, Darnold threw for 888 yards, three touchdowns, one interception, completed 68% of his passes and ran for five touchdowns. The Panthers outscored their opponents 59-30 in those games.

In the four losses, all without McCaffrey, Darnold has thrown for 795 yards, four touchdowns and seven interceptions. He’s completed worse than 60% of his passes, and the Panthers have been outscored 116-77.