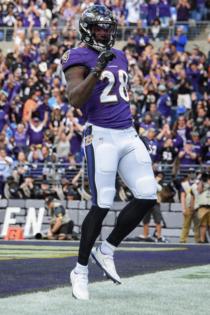 BALTIMORE — Two injured Ravens starters, running back Latavius Murray and wide receiver Sammy Watkins, were ruled out of Sunday’s game against the Cincinnati Bengals after not practicing this week.

Coach John Harbaugh said Wednesday that the Ravens would monitor Murray this week after he sprained his ankle Sunday against the Los Angeles Chargers. Watkins hasn’t practiced since hurting his hamstring in Week 5 against the Indianapolis Colts.

With Murray inactive Sunday, Ty’Son Williams is likely to return to action in the Ravens’ AFC North opener against Cincinnati. After starting the first three games of the season, Williams has been a healthy scratch two of the past three weeks.

Defensive end Calais Campbell and outside linebacker Pernell McPhee, who missed Friday’s practice to rest, are expected to play.