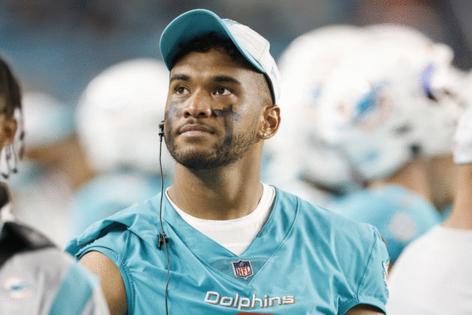 Miami coach Brian Flores praised Tua Tagoavailoa for how he’s performed in the two games he’s started and finished this season, but still wouldn’t distance the Dolphins from the rampant rumors about his team pursuing embattled quarterback Deshaun Watson in a trade.

Flores continued to hide behind his stance that rumors shouldn’t be addressed, which clearly signals that Miami could execute a trade with the Houston Texans for the three-time Pro Bowl quarterback — despite his legal issues, which stem from 22 civil suits accusing him of coercive and lewd sexual behavior, with two that allege sexual assault.

When asked if he’s concerned about the lingering trade rumors being a distraction for his 1-5 team heading into Sunday’s game against the Atlanta Falcons, Flores said he hasn’t seen it become one.

“Our players kind of block out all the stuff that is going on outside of our building,” he said. “Our focus is on Atlanta, and that’s really where our focus should be.”

Flores previously addressed Miami’s interest in Watson with the team before the season began, saying Tagovailoa is the starting quarterback. But according to sources, he’s also pointed out that every player in the NFL is in a performance-based business, and needs to deliver.

As of Friday morning, Flores hadn’t addressed the latest round of talks with Houston, which was first reported by the Houston Chronicle.

Whether that report leaked out to draw more offers for Watson before the Nov. 2 trade deadline is unclear. But the Dolphins have not distanced themselves from Watson — despite his legal troubles — and the possibility that he might not play this season because of them.

With the trade deadline looming, Tagovailoa has two games — Sunday’s home game against the Falcons and an Oct. 31 road game game against the Buffalo Bills on Halloween — to make a case that he’s the franchise quarterback the team has been seeking for two decades.

“I think this kid is smart. I think he’s tough. I think he’s talented. I think he’s accurate. I think he definitely has the opportunity to be a very good player. But there is a lot that goes into that,” Flores said about Tagovailoa, who is 7-5 in his two seasons as a starter. “A lot of work from him. A lot of work from us. It doesn’t just happen overnight. He knows that. We know that. There is always bumps in the road for anyone in any career, and any profession. ... You have to work through that adversity and become better for it.

“He’s already dealt with adversity with the hip, and he’s overcome it. I think he definitely has a chance to be a very good NFL player.”

Flores pointed out that the Dolphins have only had a healthy Tagovailoa for two games this season, and one of them was in last week’s 23-20 loss to the Jacksonville Jaguars.

Tagovailoa threw for 329 yards and two touchdowns with one interception in that game. He’s completed 64% of his passes the past two seasons, while throwing for 2,358 yards and 14 touchdowns (87.0 career passer rating).