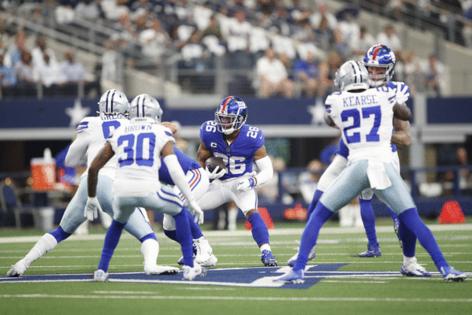 Defensive tackle Danny Shelton (pec) is doubtful for Sunday on top of all that.

This could mean call-ups or a roster signing for up to three practice squad players: wideout David Sills, DT David Moa and TE Chris Myarick.

The Giants were one of the healthiest teams in the NFL last season. Now they are inundated by injuries, including the soft-tissue injuries they did such a great job managing in 2020.

“We’re always looking at that and seeing what we’re doing,” Joe Judge said. “There’s a number of things that factor into that making sure we account for everything that goes into it. Some injuries you just can’t avoid. Some other ones you gotta look internally at what you’re doing in terms of players throughout the course of the season and how you’ve got to handle things differently.”

Barkley, Golladay and Toney did not practice all week. Engram was upgraded to limited participation on Friday after sitting out Thursday with a calf injury. He’d missed the Giants’ first two games with a calf, as well.

Shepard missed two games with a hamstring injury before returning against the Rams, then popped up on the injury report again Thursday.

Practice squad offensive lineman Isaiah Wilson returned to practice Friday after being kept out of the building on Wednesday and Thursday with what Judge called a stomach “bug.” Wilson, a former failed Titans first-round pick with a laundry list of off-field issues, has not been made available to the local media despite repeated requests since signing on Sept. 30.