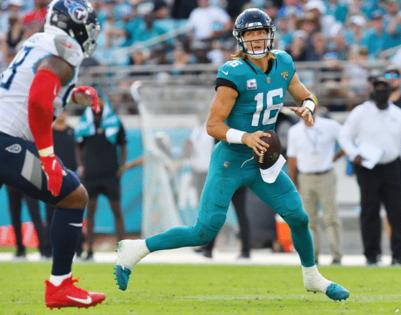 He has proven to be a young gunslinger who has caught on quickly to the speed of the NFL game, taken advantage of his quick release of the ball out of his hands and continues to show scrambling ability to extend plays.

Last Sunday in London against the Miami Dolphins, Lawrence calmly stood in shotgun formation, surveyed the defense, and changed the play at a moment's notice after seeing the Miami Dolphins had stacked the line with pass rushers during a play early in the fourth quarter.

As he saw pressure surround him, he calmly rolled toward his right. Just as Dolphins defensive end Zach Sieler lunged to grab him, Lawrence fired a pass to Jamal Agnew for a 10-yard completion in the fourth quarter.

"When we started watching him throughout the offseason and training camp, we weren't going to be surprised to see him pick it up pretty quick," Jaguars passing game coordinator Brian Schottenheimer said. "It's a different game (from college), and he's doing things he's never done, playing under center and things like that. I'm not surprised but it has definitely been impressive to watch."

The Jaguars still need to put more playmakers around Lawrence, and the offensive line needs an upgrade, especially to address depth issues. The Jaguars' receivers and tight ends also have had problems holding onto Lawrence's passes and getting needed separation. And it didn't help matters that receiver DJ Chark, the Jaguars' best deep threat target, is likely out for the rest of the season after fracturing his left ankle in Week 4 against the Cincinnati Bengals.

Yet, despite it all, Lawrence has made rapid progress since Week 1 against Houston when he put up 51 passes and was intercepted three times in a 37-21 loss at NRG Stadium.

Lawrence threw seven interceptions after the first three games of the season. He had a forgettable 14-of-33 passing performance for 118 yards and two interceptions for a season-low 37.2 quarterback rating and 42.4% completion rate in the Jaguars' 23-13 loss to Denver in Week 2.

Lawrence has one pick in last 3 games