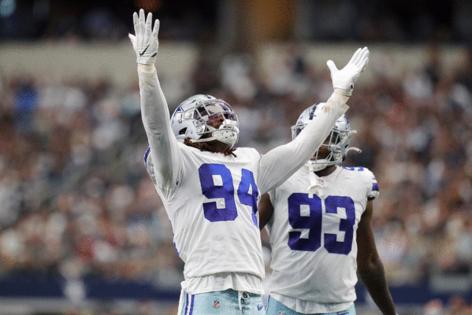 You are everything that Dallas Cowboys owner Jerry Jones and team vice president Stephen Jones thought you were when they picked you in the second round of the 2015 NFL draft, despite all the questions and red flags.

You were well worth the wait, and on the field your role as a heat-seeking pass rusher off the edge has been immeasurable.

So when you take stock of what the sizzling-hot Cowboys have accomplished through the first six games of the season, riding a five-game winning streak and leading the NFC East by three games heading into this weekend’s bye, it’s logical that most people would start with the obvious.

Quarterback Dak Prescott is in the MVP conversation, cornerback Trevon Diggs is a candidate for the Defensive Player of the Year, and linebacker Micah Parsons is a rookie who’s playing beyond his years. Plus, you’ve got the resurgence of running back Ezekiel Elliott, the breakout play of receiver CeeDee Lamb and the play-calling wizardry of offensive coordinator Kellen Moore. All are getting national attention, and rightfully so.

But no one has had a better comeback story so far this year than Gregory — on the field or off the field, considering what he has had to overcome.

But before we get to that, let’s rewind to last weekend one more time. Yes, Prescott and Lamb unquestionably were the heroes of Sunday’s 35-29 overtime victory against the New England Patriots, thanks to the walk-off 35-yard touchdown pass.

But the victory might not have been possible without Gregory, who arugably changed the game on back-to-back plays in the second quarter.

A 25-yard touchdown pass that would have put the Patriots up 21-7 was called back because Gregory drew a holding penalty. And on the ensuing play, Gregory came off the edge with lightning speed to flatten quarterback Mac Jones and force a fumble.

The Cowboys turned the turnover into a 30-yard field goal and 14-10 deficit. So instead of being down 14 points, the Cowboys only trailed by four. Credit that 10-point swing to Gregory.