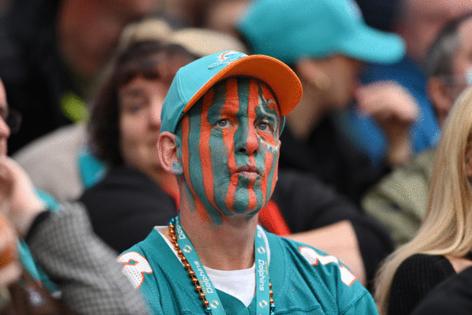 By the time Sunday came down to the young quarterbacks, Trevor Lawrence and Tua Tagovailoa, it hardly seemed relevant. This wasn’t about which quarterback had the better arm or bigger future. It was about whose organization was pathetically worse.

The Miami Dolphins answered that convincingly. They broke Jacksonville’s 20-game losing streak. There’s no other way to say it. They became the worst team in football on full merit. A few years of shabby re-building fell completely apart in a 23-20 loss to previously winless and still witless Jacksonville.

There it all was on international display: the bad ownership of Steve Ross in picking blueprints and hiring people; the bad roster of general manager Chris Grier so a game-deciding fourth-and-1 rush failed behind a line of draft picks and another struggling free-agent running back; and the bad fundamentals even by good players — twice on Sunday, for instance, tight end Mike Gesicki ran 5-yard routes in crucial third-and-6 situations.

Sunday brought the fourth and final pillar of bad front and center: Bad coaching. Very bad coaching on this day. It was one thing to lose to the evil genius of New England’s Bill Belichick all these failing years. But to make Urban Meyer look like a bright bulb in his first NFL win?

To hear Meyer say: “We needed a win. We were desperate for a win.”

Has there been a lower moment in decades of Dolphins low moments?

Where do you want to start with Sunday’s mess of coaching? The Dolphins ran out of timeouts in the first half — two were taken to get third-down defensive personnel on the field — and thus didn’t have at the end of the half and had to take a desperate 57-yard field-goal attempt. Small. But those three points mattered.

There’s nothing wrong with going for it there — in fact, yes, please, go for it. But where’s the consistency in decisions?

Finally, there was the coup de Urban in the end. Tie game. Five seconds left. Ball at the Dolphins’ 44-yard line. It’s too far for a field-goal attempt and too little time for anything but a Hail Mary play — or so the Dolphins thought at first.