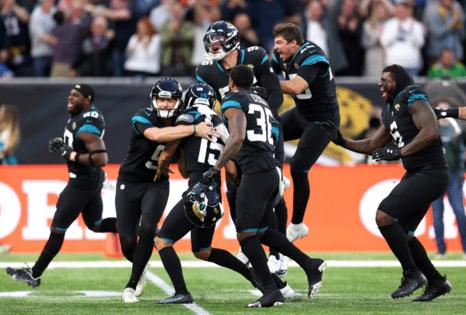 However, as soon as Meyer saw Wright's 53-yard attempt sailed through the middle of the uprights he raised his arms and his players raced from the sideline in joy.

Finally, the Jaguars are a winner. Finally the 20-game losing streak is over.

Wright's winning kick came after a gutsy called from Meyer when he opted to go for it on fourth-and-8 play from the Miami 44 with five seconds remaining with the score tied at 20. Lawrence connected to Laviska Shenault on a short pass over the middle. As soon a the catch was made, Shenault signal timeout with one second left that enabled Wright to to get on the field to make the game-winning kick.

Earlier in the quarter, the Jaguars were down 20-17 and needed quarterback Trevor Lawrence to show why he is considered a generational talent. Lawrence connected to Marvin Jones 20 yards downfield. Four plays later, Wright trotted on the field and made a 54-yard field goal with 3:45 remaining in the game to tie the score at 20.

The Jaguars defense front made a critical stop on a fourth-and-1 play from the Miami 46 when they stuffed Malcolm Brown for no gain, giving their offense possession from their own 49. But they went backwards.

Lawrence showed poise in the pocket and did a good job reading the Dolphins blitzes to roll out of the pocket and make plays. Lawrence especially looked in sync when the Jaguars speeded up the tempo. But Lawrence wasn't flawless. In the third quarter, Lawrence didn't see defensive end Christian Wilkins come up from behind for a strip sack.

Defense gets second takeaway of season

Jaguars cornerback Nevin Lawson earned his first start because Tyson Campbell was out because of a toe injury and made the most of the opportunity. He intercepted a Tua Tagovailoa pass in the third quarter in which there was not a Dolphins receiver insight. It was only the Jaguars' second interception of season. Safety Andrew Wingard had the first in Week 2 against the Broncos.

The Dolphins frequently loaded the box and forcibly made James Robinson a non-factor in the opening half. He had only seven carries for 22 yards at halftime. The Jaguars were forced to rely on Lawrence's passing in an attempt to get back in the game because they trailed the entire first half. However, Robinson broke on the Jaguars' opening drive of the third quarter. He went off left guard for 24 yards that set up his 1-yard run. It was the fourth consecutive game he's scored at least one touchdown. He took advantage of stutter steps and breaking through arm tackles.

The Jaguars had the momentum and an opportunity to add to it early in the fourth quarter on a fourth-and-1 play from the Miami 9. Instead of bringing out Matthew Wright for a short-yard field goal attempt, the Jaguars went for it. However, Robinson was stopped for no gain. In last week's 37-19 loss to the Titans, the Jaguars had a he Jaguars had a fourth-and-goal play from the 1, and instead of attempting a quarterback sneak or getting the ball in James Robinson's hands, backup running back Carlos Hyde was dropped for a 3-yard loss.

Like much of the season, the Jaguars' defense had no answer to the Dolphins' underneath routes over the middle. The Dolphins tight ends had their way on simple crossing routes. At times, defensive coordinator Joe Cullen successfully had safety Rudy Ford play man coverage on Miami tight end Mike Gesicki that led to a couple of pass breakups. The Dolphins offense came in averaging 261 total yards but they racked up more than 400 yards Sunday.