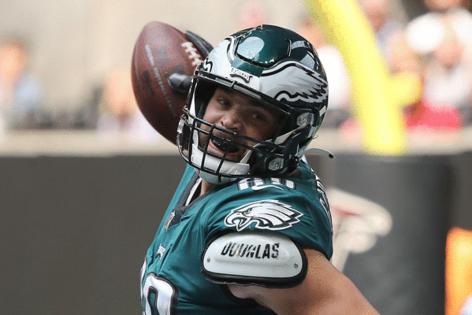 And with both tight ends looming as pending free agents, the Eagles finally decided to part ways with Ertz on Friday, when they shipped him to the Arizona Cardinals in exchange for cornerback Tay Gowan and a 2022 fifth-round draft pick.

“It’s become pretty clear to us that going forward we weren’t going to be able to have both of those guys,” general manager Howie Roseman said in a news conference following the trade. “It gives us an opportunity for Dallas to step up and be that No. 1 guy and have that opportunity for the first time in his career.”

Ertz leaves behind a storied legacy in his eight-plus seasons with the franchise. The three-time Pro Bowler who turns 31 next month ranks second on the Eagles’ all-time receptions list, just 10 behind Hall of Famer Harold Carmichael. He’ll forever be remembered for being on the receiving end of the game-winning touchdown in the franchise’s only Super Bowl victory.

But with Ertz departed, Goedert will step into a prominent role as TE1.

Since being selected in the second round of the 2018 draft, the 26-year-old Goedert has emerged as one of the league’s best young tight ends — despite at times playing in a limited role. During that span, Goedert ranks sixth among tight ends in yards after catch and eighth in receiving touchdowns.

“It gives him an opportunity to put his stamp as a leader on this team,” Roseman said. “From our perspective, this is an opportunity to see Dallas in a larger role. Obviously, he’s a free agent. That’s no secret. It’s something we have to address. We’re getting him into a role where he’s not sharing time and he’s the guy.”

Goedert was placed on the COVID-19/reserve list on Tuesday, and he missed Thursday’s loss to the Buccaneers. He’ll need two consecutive negative COVID-19 tests in order to return to the team, per NFL rules and regulations. Goedert’s absence allowed Ertz to finish his tenure in Philadelphia as the starting tight end, which Goedert will take over upon his return.

Goedert, who is in the final year of his rookie deal, will be seeking top dollar in free agency.

“In terms of our bargaining power, there’s going to be no discount on Dallas Goedert,” Roseman said. “We want to get as much information and give him as much opportunity to take over.”