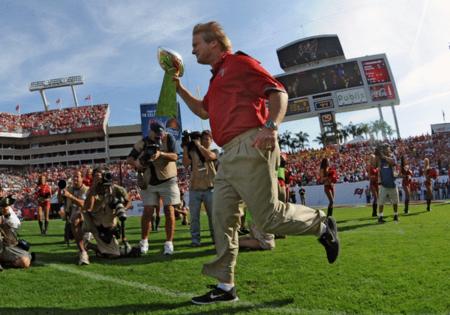 You see, I’ve been thinking about the Jon Gruden email situation and what it meant for Tampa Bay. Specifically, whether his name should be removed from the team’s Ring of Honor.

My first reaction was no. And I felt that way for a variety of reasons.

Mostly, it was because the Ring of Honor is as much about Bucs fans as it is the person being feted. The names emblazoned on the facade of the Raymond James Stadium upper deck signify moments and memories that are dear to folks who live and die with the accomplishments of a franchise.

So why should their recollections of Tampa Bay’s first Super Bowl title be besmirched by revelations of Gruden’s crass emails that were written after he was no longer on the Bucs sideline?

Just about the time I came to that conclusion, the Glazer family announced that Gruden’s name would be removed from the Ring of Honor. Their decision was so swift and emphatic, I was completely caught by surprise.

So were the Glazers wrong?

In retrospect, I don’t think they were. They have been pioneers for inclusivity going back to the 1990s when they hired Tony Dungy as head coach, and if they decide they want to disassociate themselves from someone who was using racist, sexist and homophobic language, they have every right. In fact, they should be applauded for taking a stand.

So does that mean my initial impulse was wrong?