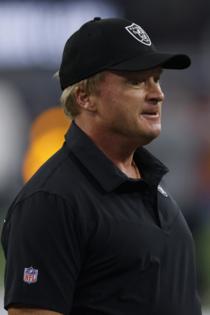 But wouldn’t it have been worse for Brady’s private text messages, emails and photos to be leaked and made public, after being handled by lawyers and league investigators?

Jon Gruden deserved to be fired by the Las Vegas Raiders this past week for the racist, misogynistic and homophobic language uncovered in his emails with former Washington team president Bruce Allen and others.

Jeffrey Pash, the NFL’s executive VP of labor/league counsel, should be canned for the cozy relationship he shared with Allen in their leaked email exchanges, reported by the New York Times and Wall Street Journal.

Pash even allegedly wrote an email to Allen, after the Washington president shared an audio file of a team song aimed at attracting Latino fans, that read: “I am not sure this song will be as popular after the wall gets built.”

So much for not mixing politics and football, something that got quarterback Colin Kaepernick blackballed from the league.

This is no longer about what we already know, though. This is about the emails that haven’t yet come out, and how damaging they will be, and to whom.

“This looks like it’s only going to get worse,” one league source told the Daily News.

Someone has a hold of the 650,000 emails gathered in the NFL’s investigation of workplace misconduct in the Washington Football Team’s front office. And drip by drip, damning emails are coming out, taking down some of the most powerful people in the league.