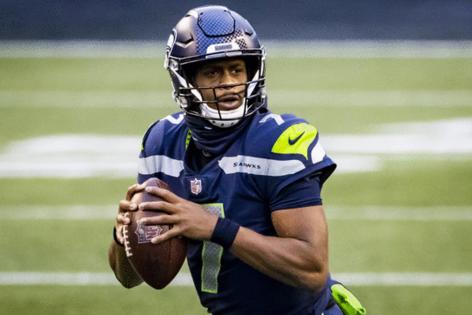 SEATTLE — It's a time-honored truism of football that everyone loves the backup quarterback. He's a beacon of hope and possibility — facets that often are exposed as wishful thinking once pipedreams are replaced by actual playing time.

Geno Smith, who gets his first Seahawks start on Sunday six games into his third season as Russell Wilson's understudy, has managed to twist the storyline a little bit. The classic backup tale involves a struggling starter that the fan base has lost faith in; the eternal theory is that the No. 2 guy can't do any worse, and maybe he can do a lot better.

Obviously, that's not the case in Seattle, where everybody but the most cynical are satisfied with Wilson. No one was calling for his ouster from the starting job, or clamoring for Smith's ascension. It took an injured finger requiring surgery to accomplish that outcome — the first injury to sideline Wilson in his nine-plus seasons as Seattle's quarterback.

Yet there still has been an outpouring of support for Smith, who had fans chanting his name when he entered the game after Wilson's injury last Thursday to try to execute a comeback win over the Rams.

Smith didn't quite pull it off, but now he's at the center of another time-honored storyline in sports — the underdog tale. There's an undeniable appeal to seeing a 31-year-old guy who hasn't played regularly in seven years finally get his shot. And try to do what most deem impossible: Replace one of the league's best quarterbacks and keep alive the Seahawks' flagging hopes to make the playoffs.

It has the makings of a redemption story that would tug on everyone's heartstrings.

Smith lost his starting job with the Jets because he got sucker-punched by a teammate, and then got "Wally Pipped" by Ryan Fitzpatrick while he was recovering from the resulting broken jaw.

Since then, Smith has wandered from the Jets to the Giants to the Chargers and finally the Seahawks, sitting behind three of the sturdiest quarterbacks in NFL history — Eli Manning, Phillip Rivers, and Wilson.

In Seattle, teammates and fans have learned to appreciate Smith's loyalty. He said he could have left for other opportunities, but decided he liked it too much here, despite always knowing his chances of garnering playing time were remote.

"The reality was that I was comfortable here with the team, coaches, front office, and all of the players," he said Thursday.