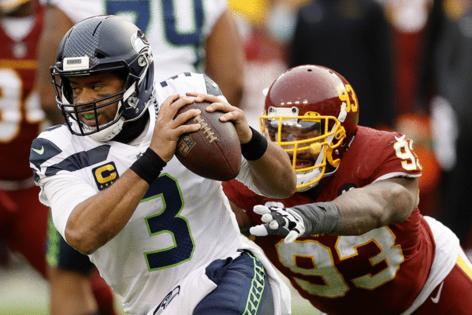 But that will be the last on-field work Wilson gets for a few weeks. After Friday’s practice the Seahawks placed Wilson on injured reserve, as well as running back Chris Carson, who continues to battle a neck injury.

That means Wilson and Carson must miss the next three games, beginning Sunday night at Pittsburgh and home games Oct. 25 against New Orleans and Oct. 31 against Jacksonville.

Each can return for the Seahawks’ Nov. 14 game at Green Bay (the Seahawks have a bye Nov. 7), which would be 37 days following the surgery Wilson had last week to repair a ruptured tendon and dislocation in his right middle finger. There have been several reports that Wilson has set the Green Bay game as a target date to return.

Because Wilson had not been placed on IR he was able to practice this week. He was again listed as limited Friday, as he had been Thursday when he threw a few passes with his left hand.

But with Sunday’s game approaching, Seattle needed the spots on the 53-man roster.

The move makes it official that Wilson’s streak of 149 consecutive games — the sixth-longest in NFL history — will end against Pittsburgh, with Geno Smith getting the start. Wilson also had the second-longest streak of games played in team history behind punter Jon Ryan (159).

For now, the Seahawks have just 52 active players, and apparently is planning to elevate Jake Luton off the practice squad to serve as a backup QB to Smith Sunday. But players can only be elevated from the PS twice in a season and they may eventually have to sign Luton to the 53. The Seahawks also signed Danny Etling to the practice squad this week as additional QB depth.

Carson missed last Thursday’s game against the Rams. But there was optimism he would play when Carroll said Monday that Carson had taken a significant, positive turn in his recovery and said Wednesday that Carson would practice Thursday.