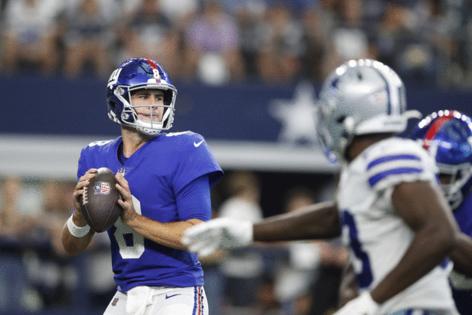 Jones practiced in full Friday morning and was cleared from the concussion protocol in the afternoon by an independent neurologist.

That was the final step in his recovery from last weekend’s scary head injury against the Cowboys in Arlington, Texas.

The Giants (1-4) need a bounce back win against the Rams (4-1) after getting blown out 44-20 by their division rival Dallas.

Jones was knocked out of the Cowboys game in the second quarter when he went helmet to helmet with Dallas linebacker Jabril Cox on a goal line quarterback keeper. The Giants’ QB also hit his helmet hard on the turf.

He was wobbling on national TV when he stood up until someone finally tended to him. Then he was carted off, with teammate Kadarius Toney running over to get him a handshake and hug.

“That’s my brother. That’s my dog,” Toney said Friday. “If he’s hurt, I’m hurt. That really kind of made me go harder, just knowing that he wasn’t able to do what he’ll normally do, like contribute as much as he can, just put another chip on my shoulder.”

He carried his pads onto Wednesday’s practice field, took snaps and did some sprinting. Then he practiced normally Thursday and Friday before getting final clearance entering the weekend.

“You saw Daniel come out here the other day in full pads and he wasn’t participating [in the team period],” Judge said. “He doesn’t want to do something different than the rest of the team. What we’ve had to explain to him is, there’s a time and a place for that and there’s also a time and a place to protect the team by sliding, getting out of bounds and making the right decision. That’s not always the easiest thing for a competitor to hear.”