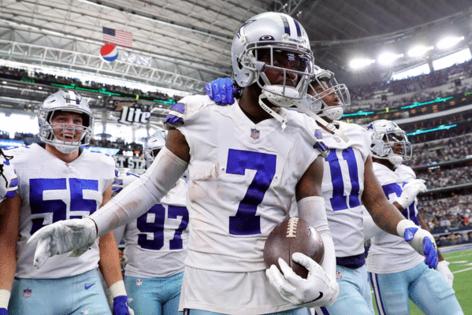 FORT WORTH, Texas — After Dallas Cowboys cornerback Trevon Diggs recently shared the story that he cried when Alabama's Nick Saban told him he wanted him to switch positions, I needed the coach to clear that one up for me.

On Wednesday morning, I asked Coach Saban himself if he was aware that he left Diggs' crying.

Saban didn't address the tears, most likely because Diggs didn't share those with his former head coach.

"I don't make guys move positions. It was his final decision to do it," Saban said on the SEC coaches' conference call. "I said, 'Look, you have a better future as a defensive back.' "

There are two reasons why Diggs agreed to the move.

1.) What Alabama player is going to tell Nick Saban, Coach, after careful consideration I'm not going to do what you advise. I appreciate your input and advice, and we'll see you at practice.

Saban didn't exactly sound "chipper" (he doesn't after winning the national title) on Wednesday morning, but the subject of talking about one of his former players doing well in the NFL is a better topic than, say, having to respond to questions about losing to unranked Texas A&M.

A second-round draft pick by the Dallas Cowboys in 2020, so far Diggs is the NFL's Defensive Player of the Year.