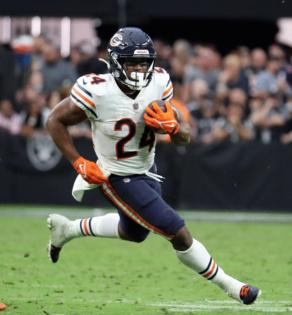 CHICAGO — On the first handoff he took from quarterback Justin Fields last Sunday, Khalil Herbert broke to his left, darted around a big Jason Peters block and kept charging forward even as a Las Vegas Raiders defender tried to pull him down by his leg.

The 11-yard run started the type of day the rookie dreamed about when the Chicago Bears drafted him in the sixth round in May.

Despite joining a crowded running backs room that included David Montgomery, Damien Williams and Tarik Cohen, Herbert told himself to work as if he would be needed at some point this season. When he got his opportunity in Week 5 because of Montgomery’s and Cohen’s knee injuries, Herbert came through with 18 carries for 75 yards in a 20-9 victory.

Now, the Bears could need even more from Herbert on Sunday against the Green Bay Packers at Soldier Field.

The Bears placed Williams, who had 16 carries for 64 yards and a touchdown against the Raiders, on the reserve/COVID-19 list Thursday after he tested positive for the virus. Montgomery remains on injured reserve with a knee sprain, and Cohen still hasn’t return from last season’s ACL injury.

“Every day I come in here, I’ve got to be ready to go,” Herbert said. “I didn’t know when the playing time would come. It came earlier than I thought. But those guys did a great job of always keeping my mind going, keeping me mentally in tune and keeping me ready to go.”

Over the first four games, Herbert appeared on special teams, including nine kickoff returns for 254 yards, and said he did mental reps on offense to stay prepared for when he got a chance. He had three carries in the Week 4 victory over the Detroit Lions after Montgomery was injured.

Herbert said he wasn’t nervous knowing he’d have a greater role, noting Montgomery and Williams, who are in their third and seventh seasons, helped him prepare. But it did require a mental adjustment to the game speed, which he said is “a lot different than the preseason.”

“You saw some really good times where he hit that zone and he stuck that right or left foot in the ground, planted it, and he went north and south and got 7, 8 yards every time,” Nagy said. “I like his vision. I like his patience. I also like his toughness, and you guys see it when he’s returning kickoffs. He’s smooth, and people bounce off him, so he’s got good contact balance.”