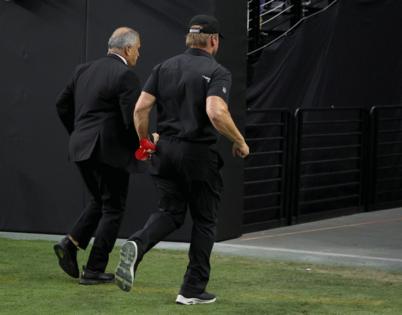 KANSAS CITY, Mo. — A year ago Monday, Jon Gruden's Raiders ended a seven-game losing streak at Arrowhead Stadium with a 40-32 victory over the Chiefs. The postgame celebration included the Raiders and Gruden asking their police escort to allow the team buses to take a victory lap around the stadium.

But the Chiefs resumed their recent dominance of the rivalry with a 35-31 win in Las Vegas six weeks later, days after an irked Andy Reid had taken a jab at his longtime friend by saying such taunting theatrics are "not our style."

As it happens, a year to the day after that episode, even the Raiders couldn't abide by the heedless style that is part of Gruden's makeup, illuminated now and forever forward in the form of the racist, homophobic and misogynistic emails that led to his abrupt resignation on Monday.

Good on the Raiders for forcing bold and decisive action ... on National Coming Out Day, no less.

But the fallout will hover and hard questions are ahead as the NFL is forced to confront the broader meaning of Gruden's repulsive sentiments — all the more appalling for the casual way he flung them around.

That includes learning more about who around the league enabled or even emboldened his behavior, either by chiming in or tacitly condoning it with silence.

More intangibly, it includes reassessing to what degree his way of thinking, even in more subtle forms, persists around the NFL and seeps into obvious ongoing issues such as the under-representation of Blacks in major roles, such as head coaching positions.

Witness, for instance, the case of Chiefs offensive coordinator Eric Bieniemy, who is believed to have been interviewed for a dozen head coaching jobs the last few years only to be passed over again and again. And Bieniemy's name is surfacing again now as a possible eventual replacement for Gruden while special teams coordinator Rich Bisaccia takes over as interim head coach.

The Las Vegas Review-Journal reported that Bieniemy is among the top candidates to replace Gruden and The Sporting News listed him as the top prospect.

The Raiders indeed would do well to strongly consider Bieniemy, but you have to wonder how strongly Bieniemy should consider the Raiders given the AFC West rivalry with the Chiefs and the cultural flux that will be in play in Las Vegas for the foreseeable future.

Thanks to a trove of Jon Gruden’s offensive e-mails, the public got a look inside one of the NFL’s inner circles.

And what was seen isn’t pretty.

The venue has garnered a reputation as one of the NFL’s most unfriendly confines, a South Philadelphia snakepit where they once even booed Santa Claus.

To which Bucs fans can rightfully retort, humbug.

TAMPA, Fla. — Tom Brady is taking a wide-open approach to distributing the football this season. If you’re the guy who is least covered, he will find you.

Because the Bucs are loaded with pass-catchers, Brady doesn’...Read More

Najee Harris was the first 100-yard rusher in 16 games. Ben Roethlisberger had his first multiple touchdown game with no interceptions since Week 15 last season. And the Steelers had more runs than passes for the first ...Read More

BEREA, Ohio — When Malik McDowell was called on to share his story, he considered it a chance to perhaps save a teammate from the mistakes that landed him in jail.

The request came during training camp and was part of ...Read More

But McVay said Wednesday he was surprised and saddened by the content of emails ...Read More