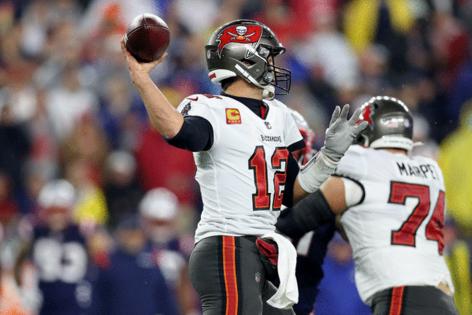 TAMPA, Fla. — Tom Brady is taking a wide-open approach to distributing the football this season. If you’re the guy who is least covered, he will find you.

Because the Bucs are loaded with pass-catchers, Brady doesn’t have to force-feed one or two players but can run the offense like a point guard leading the break.

That doesn’t include tight end Rob Gronkowski, who had 184 receiving yards and four touchdowns before fracturing his ribs in a Week 3 game against the Rams.

“That’s a great thing to have as a quarterback, to just try to read the play out and find the first guy that’s open and let him have it,” Brady said. “Sometimes, you’re trying to force the ball to certain guys and you recognize that there’s certain players on the team that are head and shoulders above everyone else. I think we have a lot of really talented players, obviously, that have all made a lot of plays.”

Brady compared it to the confidence a point guard has passing to a teammate for a 3-pointer.

“It would be tough if you knew that if you kick it out there, he’s going to miss it,” he said. “You don’t really want to pass it out there. In this offense, I’ve just got to find the guy that’s got the winning route and I know that’s going to come down with it, make the catch and make the play.”

The Bucs’ 45-17 win over the Miami Dolphins on Sunday may have been the best game Brady has had throwing the football since arriving in Tampa Bay.

What’s more remarkable is that he did it with a banged-up thumb on his right throwing hand. With 4:11 remaining in the second quarter, Brady used play-action to running back Ronald Jones, then snapped his head around and fired a 12-yard strike to tight end Cameron Brate for a first down at the Miami 17.

But Brady struck his thumb on the helmet of Dolphins defensive lineman Christian Wilkins.

Najee Harris was the first 100-yard rusher in 16 games. Ben Roethlisberger had his first multiple touchdown game with no interceptions since Week 15 last season. And the Steelers had more runs than passes for the first ...Read More

BEREA, Ohio — When Malik McDowell was called on to share his story, he considered it a chance to perhaps save a teammate from the mistakes that landed him in jail.

The request came during training camp and was part of ...Read More

But McVay said Wednesday he was surprised and saddened by the content of emails ...Read More