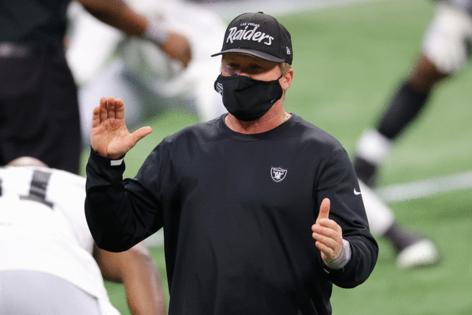 But McVay said Wednesday he was surprised and saddened by the content of emails discovered during an investigation of the Washington Football Team that led to Gruden's resignation as coach of the Las Vegas Raiders.

"I have not seen that side of him," McVay said, "and I was surprised by it."

McVay, preparing his team for a road game Sunday against the New York Giants, clearly anticipated he would be asked about Gruden.

He opened his news conference with an attempt to get in front of the questions.

"It's really an unfortunate situation that's gone on with the Raiders and coach Gruden," McVay said. "I hated that so many people have been negatively affected by this. Thoughts and prayers are with all those people that are.

"And really just want to leave it at that and we're focused on the Giants."

But McVay spent the majority of his 12-minute session fielding questions about the situation.

McVay said he had not had contact with Gruden in the aftermath. McVay, a Washington assistant from 2010 to 2016, said he was not contacted by the NFL as part of the investigation of the Washington Football Team.

He said he was "sad" about the emails. He was asked to clarify if he was sad about the content or sad for Gruden.

"It's kind of a sad commentary all around. It's an unfortunate thing that we're even talking about it right now."