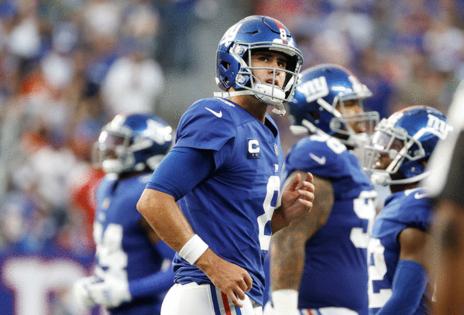 Jones will be listed as “did not practice” for Wednesday. Head coach Joe Judge even said prior to practice that Jones would not be on the field.

But a strange scene unfolded: as Judge was still addressing the media, Jones walked out onto the practice field with his pads, started warming up, jogging and taking snaps as the second-string QB.

Then Jones was sprinting full speed, taking real snaps and making normal throws on the back field as his teammates practiced.

Judge said before practice that Jones was an option to play Sunday.

“From all the information we have, yes, if he’s cleared medically,” the coach said.

But Jones’ return to significant on-field work was a surprisingly rapid progression given his Sunday concussion against the Dallas Cowboys.

There are five steps for a player to clear the concussion protocol, per the league’s collective bargaining agreement with the NFL Players’ Association.

By that terminology, Jones is already step four of that process in just his third day since the head injury.

A player has to complete each step “without a recurrence of signs or symptoms of concussion,” with his neurocognitive testing returning to baseline levels. And if a player’s testing doesn’t return to baseline levels after an increase in activity, the typical interval to repeat that testing is 48 hours.

Obviously it would be encouraging for the Giants (1-4) to get Jones back, given how tough it will be to beat the visiting L.A. Rams (4-1) even if he plays.

Still, it was unexpected that he would do this much on the field Wednesday.

It’s not the Green Bay Packers clearing Davante Adams from a concussion just minutes after being knocked out in a game, but it is surprising.

Left tackle Andrew Thomas (left foot) and left guard Matt Skura (unknown injury) were on the side with trainers, not practicing. This would seem to indicate that Wes Martin rotated in at left guard at Dallas because Skura had gotten hurt in-game.

LOS ANGELES — Several inflammatory emails by Jon Gruden were filed as exhibits in federal court by attorneys for Washington Football Team owner Daniel Snyder in mid-June, almost four months before they were leaked to two...Read More

KANSAS CITY, Mo. — During his time in the NFL, with the Patriots from 2006-09 and the Chiefs from 2009-10, former offensive tackle Ryan O'Callaghan says nearly everything in his life revolved around hiding his sexuality....Read More