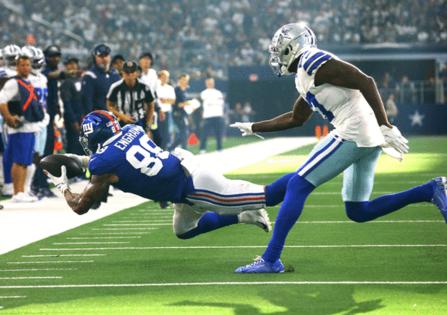 Cowboys safety Jayron Kearse punched Giants tight end Evan Engram in the face during handshakes on the field after the game was over, sources told the New York Daily News.

“I was pushing him around the whole game, so he was probably just mad about that,” Engram told the News on Wednesday. “It’s whatever.”

Engram said he didn’t punch back because Kearse had thrown “a little baby punch.” Plus, he didn’t want to get fined.

“There’s this thing the NFL does, they send out letters and they forcefully take money from you for acting up,” Engram said, tongue in cheek. “So I don’t need any of that. It was a little baby punch anyway. It was soft. So I definitely want to keep my money in my pocket. I’m good.”

A Cowboys spokesman declined comment on behalf of Kearse.

The perception coming off Dallas’ 44-20 win was that the Giants were the only team that had lost their cool. Leonard Williams certainly didn’t help that perception by ripping Cowboys running back Tony Pollard’s helmet off as the fourth quarter wound to a close.

Kearse admirably had rushed to the aid of a wobbly Daniel Jones in the second quarter, also.

But the Kearse-Engram postgame incident has gone around the Giants’ locker room. And they’re filing it away for Dec. 19 when the Cowboys come to New Jersey for a rematch.

CHARLOTTE, N.C. — It’s time the Panthers fully commit to Sam Darnold for the remainder of the season and look internally to solve their offensive issues.

On Wednesday morning, The Observer confirmed reports that the ...Read More

TAMPA, Fla. ― Jason Pierre-Paul is used to chasing Jameis Winston to the ends of the earth. The former teammates went hiking together in Colorado during the offseason.

But Pierre-Paul is even more eager to be reunited ...Read More

TAMPA, Fla. — Initially, Charlie Crist recognized only the gesture, not the guy in the Mike Evans jersey, dark sunglasses and wide straw hat delivering it.

Like millions of others, Crist watched Sunday afternoon as CBS�...Read More