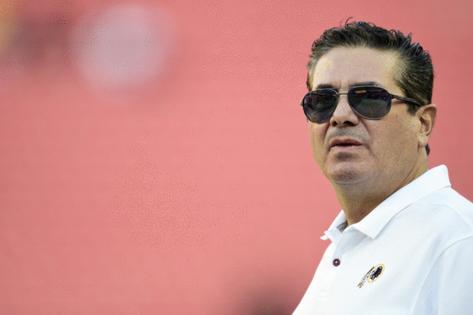 LOS ANGELES — Several inflammatory emails by Jon Gruden were filed as exhibits in federal court by attorneys for Washington Football Team owner Daniel Snyder in mid-June, almost four months before they were leaked to two newspapers and led to Gruden’s resignation as coach of the Las Vegas Raiders.

The heavily redacted emails between Gruden and then-Redskins president Bruce Allen filed in U.S. District Court in Arizona include offensive language, chummy conversations with journalists — including an ESPN journalist referring to Allen as “Mr. Editor” while seeking feedback on an unpublished story he sent to Allen to review — and a barrage of complaints about the state of the NFL.

The emails are identical to some of those reported this week by the New York Times. That story detailed homophobic and misogynistic comments by Gruden in emails with Allen. A day earlier the Wall Street Journal reported Gruden used a racist trope in another email exchange.

Gruden’s name is redacted in most of the emails filed in court, replaced with “ESPN Personality.” He was employed by the network as the “Monday Night Football” analyst before rejoining the Raiders in 2018.

However, Gruden’s name and personal email address aren’t redacted — apparently by mistake — in an exchange with Allen from November 2017 discussing a news story about the NFL potentially keeping teams in their locker rooms during the national anthem because of players kneeling on the field in protest during the song.

“These guys can’t come up with a good idea if their life depended on it,” Allen wrote.

Gruden sent a one-word response — starting with “p” and ending in “ies” with the three middle letters redacted.

In another email, the “ESPN Personality” wrote Allen in August 2014 and called a “Redacted — Football Person” a “clueless anti football p---y.” The New York Times reported the email referred to NFL Commissioner Roger Goodell and the slur, partially redacted in the email, is “pussy.”

The “ESPN Personality” emailed Allen in June 2015, saying that “[Redacted Football Person] shouldn’t call [Redacted Football Person] and tell him to draft que--s either. That pisses Em off too.” The New York Times reported that Gruden sent the email and the redactions referred to Goodell, former Rams coach Jeff Fisher and “queers” after the Rams selected openly gay linebacker Michael Sam in the NFL draft.

MINNEAPOLIS — Vikings defensive end Everson Griffen has been ruled out for Sunday's game in San Francisco, although his leave from the team is considered indefinite. Coach Mike Zimmer did not provide any update on ...Read More

BEREA, Ohio — Jack Conklin agreed with a reporter who used the word "miraculous" to describe the All-Pro right tackle returning quickly from a dislocated left elbow.

"Yes, that's for sure," Conklin said after Friday's ...Read More

PITTSBURGH — For the second time this season, T.J. Watt is returning to the Steelers lineup after missing just one game due to injury.

Watt will be back Sunday to face the Bengals after sitting out last week against the...Read More

National Football League team owners, including a deservedly humbled Stan Kroenke, appear to have averted embarrassing public revelations of their finances and double dealing by reaching a mediated settlement with the ...Read More

SANTA CLARA, Calif. — Call it the Magic 40, and it has helped turn around a 49ers season that appeared to be on the rocks three weeks ago.

TAMPA, Fla. — Tom Brady has created a lot of enemies in 21 seasons, perhaps none bigger than the Colts and their fans. The team with the horseshoe on its helmet that once had a quarterback named Luck never has had much ...Read More