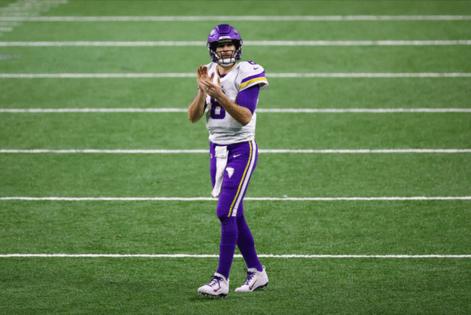 MINNEAPOLIS — On Monday, coach Mike Zimmer said again how Kirk Cousins has been more outspoken as a leader during his fourth season with the Vikings than the quarterback had been during his first three years in Minnesota.

Last week, Cousins made a significant statement with his money.

Cousins surprised the Vikings' social justice committee last week, according to a team source, with a $500,000 donation, announcing the gift during a committee meeting on Oct. 5. The quarterback spoke briefly during the meeting about the gift, which the committee will use at its discretion to Minneapolis-St. Paul organizations whose missions are consistent with its focus areas.

The committee has been in operation since before the 2018 season, working on issues like law enforcement and criminal justice reform, educational outcomes for students of color, curriculum on racism and Black history and increased voter registration.

The money will come from the Julie and Kirk Cousins Foundation.

The Wilf family, owners of the team, donated $500,000 to the committee in 2018 and '19, before making a $5 million commitment last year in the days following George Floyd's murder in south Minneapolis. The social justice committee set up an annual $5,000 scholarship in Floyd's name for a graduating Black student in the Twin Cities, awarding the first scholarship to Minneapolis Southwest graduate Mimi Kol-Balfour.

Cousins, who is on a two-year, $66 million contract through next season, has worked with the committee at various points since he arrived in Minnesota three years ago, but he has gotten more involved this year, at the same time he has worked to connect with teammates and coaches on a different level. Teammates have said Cousins has been more open and outspoken this year, which the quarterback said last month was a result of finding his place in Minnesota after signing his first deal with the team in 2018.

"It's important to be self-aware and understand how you fit," Cousins said. "In '18 I wasn't going to show up and say, 'Hey, you guys just went 13-3; I have all these good ideas, listen to me.' There's a little bit of, 'How do I fit into this puzzle?' Now that three years have passed, my fourth season, there's a little bit more ability to have assimilated and understand how this organization works, how you fit in that puzzle."

His much-publicized exchange with Zimmer after Sunday's victory over the Lions — during which Cousins grabbed the coach by the shirt collar and yelled his catchphrase, "You like that?" before Zimmer shoved him in celebration — was an example of how he's opened up, Zimmer said Monday.

"He's doing exactly what I want him to do," Zimmer said. "He's being a leader, he's being vocal, he's showing emotion. I've been talking to him about it all year. It's no different than when [Sam] Bradford tackled me in practice [in training camp in 2017], because I was trying to get him to be the same thing. So you know, [Cousins] came over and said, 'You like that?' and kind of gave me a shove, and I shoved him back, and it was all good."

It seems clear and incontrovertible here a whole six games into his career that the Falcons Kyle Pitts is a difference-maker and mold-breaker of unique proportion. We may be in the age of instant and fleeting celebrity, ...Read More

SANTA CLARA, Calif. — The rain kept falling Sunday night, symbolically escorting the 49ers to a fourth straight loss that has their season in an embarrassing freefall.