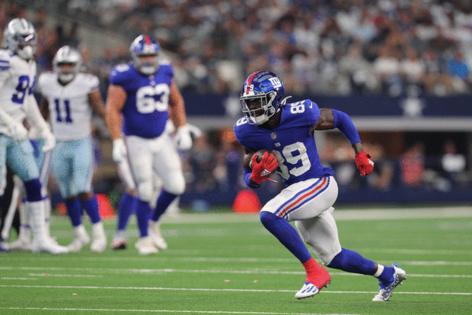 Here are my best bets off the waiver wire for Week 6:

— WR Kadarius Toney, Giants (ESPN: 12%; Yahoo: 18%): The G-Men have been decimated by injuries and it's unsure when Kenny Golladay (knee), Sterling Shepard (hamstring) or Darius Slayton (hamstring) will be healthy again. Toney has made the most of his opportunities and has earned more reps even when everyone returns to the field. The dynamic first-rounder has 267 yards on 16 receptions (22 targets) the last two games. Toney did appear to tweak his ankle against Dallas, but it doesn't appear to be significant.

— RB Devontae Booker, Giants (ESPN: 4%; Yahoo: 8%): Booker will be the starter for the foreseeable future after Saquon Barkley injured his ankle. This isn't really about upside, it's about volume. The veteran produced 58 total yards and two total touchdowns on 19 touches against Dallas.

— QB Carson Wentz, Colts (ESPN: 6; Yahoo: 14%): Wentz has played significantly better the last two games — 630 yards and four touchdowns against zero interceptions — and would be a solid replacement if you recently lost Russell Wilson, assuming Sam Darnold and Daniel Jones are not available.

— RB Darrel Williams, Chiefs (ESPN: 8%; Yahoo: 18%): Clyde Edwards-Helaire will miss at least a few weeks with an MCL sprain. Williams will likely split receiving work with Jerick McKinnon, but he'll deserve flex consideration until Edwards-Helaire returns. Kansas City's next three games: at Washington, at Tennessee and the Giants at Arrowhead.

— BONUS: WR Rashod Bateman, Ravens (ESPN: 13%; Yahoo: 24%): Lamar Jackson is currently on pace to throw for 5,165 yards. This is by necessity with a roster riddled with past-their-prime running backs after sustaining several injuries in the preseason. Bateman will likely be activated this week against the Chargers. The rookie is arguably the most talented wide receiver on this team.