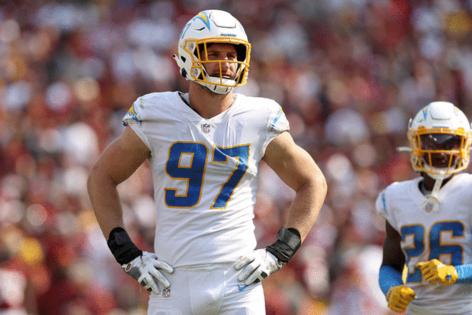 LOS ANGELES — Edge rusher Joey Bosa did not practice Friday for the third day in a row, but the Chargers have not ruled him out for their game Sunday at Kansas City.

The three-time Pro Bowl player is dealing with what the team has called ankle and foot issues. He is officially listed as questionable.

"It's not anything serious or long term, but it's just one of those, I mean, it's sore, for sure," coach Brandon Staley said. "It's definitely loosened up as the week's gone on … but we're just trying to be careful."

Any limitations would be less than ideal for Bosa, who, if he does play, figures to spend most of the game chasing Patrick Mahomes, one of the most elusive quarterbacks in the NFL.

Staley suggested a decision on Bosa's availability might not come until shortly before game time. Teams must release their active game-day rosters 90 minutes before kickoff.

Defensive tackle Justin Jones (calf) is doubtful for Sunday. He was injured in the Chargers' opener and didn't play Sunday against Dallas.

Defensive back Chris Harris Jr. (shoulder) also was hurt in Week 1 and remains out. He won't play against Kansas City.

For the remainder of his career, any time Justin Herbert plays Kansas City the story of his first NFL start will be ripe for the retelling.

Herbert debuted unexpectedly against the Chiefs in Week 2 last season after Tyrod Taylor was knocked from the game minutes before kickoff by a medical mishap that resulted in him suffering a punctured lung.