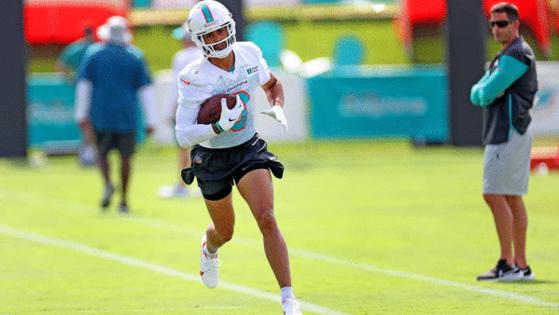 Will Fuller, the Dolphins’ biggest free-agent addition this offseason, completed a full week of practice with his new team for the first time since mandatory minicamp back in the summer.

That hints that Fuller appears to be on track to play in Sunday’s road game against the Las Vegas Raiders, which excited everyone associated with the Dolphins.

Fuller missed all of training camp and the preseason because of an undisclosed soft tissue injury. He sat out the season opener because of an NFL imposed suspension, which wrapped up a six-game suspension for PED use that stemmed from his 2020 season with the Houston Texans.

And last week Fuller left the team after practicing once to address what was labeled as a personal issue.

He returned on Monday and had three days of practice with Miami’s offense, and the hope is that he’ll be incorporated into the game plan come Sunday.

The early reviews from Fuller’s teammates haven’t exactly lowered the bar on expectations.

“It doesn’t even look like he’s running. He’s picking up so much ground while he’s out there and moving along. You can’t even tell he’s trying,” fellow receiver Albert Wilson said. “His speed is outstanding, and it’s definitely going to be something we can use in this offense.”

The Dolphins signed Fuller to a one-year incentive-laden deal worth a base of $10.6 million, with an extra $3 million tied to his productivity, hoping that his presence would open up the field for the rest of Miami’s arsenal.