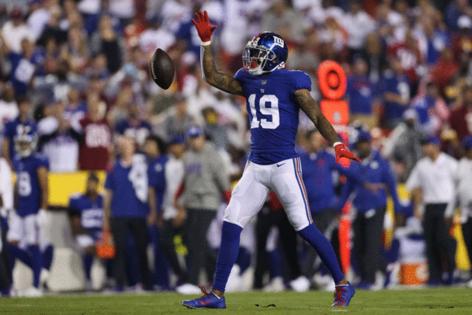 Golladay might see his snaps reduced Sunday against the Atlanta Falcons, though, in an effort to keep him fresh for late-game situations.

Wide receivers coach Tyke Tolbert said Golladay’s “conditioning level is not where it should be” due to the August left hamstring pull that sidelined him for most of training camp.

And now Golladay is listed as questionable with a new hip injury.

So Tolbert said “one of the things I can help him with personally is probably to lessen his snaps a little bit” so he’s fresh for when it matters most.

“You get to a critical part of the game, you want your best players out there,” Tolbert said.

Golladay described his body as “tired” twice in the last two weeks while logging 85% of the Giants’ snaps on offense (110 of 130). He has handled that workload after missing most of training camp and all three preseason games.

Tolbert also noticed Golladay wearing down “at times” last week at Washington, in the Giants’ second game in five days to open the season.

In the fourth quarter at Washington, however, Golladay clearly felt he could have made more of a difference if Garrett had given him more chances on different routes.

How big of a deal was it? How big of an issue could it become? Garrett mostly brushed it aside as a non-issue.

“I love the guy,” Garrett said Thursday. “He wants to be a part of this thing. He missed a lot of time during training camp. He’s done a good job when he’s gotten some opportunities. He had a couple in that game that unfortunately we didn’t finish and probably had some frustration. That stuff happens on the sideline all the time.”

Garrett also said it’s not fair to ask players to “scratch and claw” on the field and then “come to the sidelines” and suddenly become “choir boys.”

“He and I had a good visit after the game,” the Giants’ OC said. “It was not an issue at all. There’s always better ways to handle things, better ways to communicate. But it wasn’t a big deal to me and to our team at all.”

The need for that postgame visit, however, and Golladay’s absence from the postgame interview availability, reinforced that this was a sensitive issue coming off the field that night.

Garrett also bristled when questions persisted about the topic on Thursday, and he said — accurately — that Golladay did receive opportunities down the field and didn’t always convert.

“I’m not gonna keep talking about this,” Garrett said. “Kenny got different opportunities in the game and did a good job with some of them, and a couple of them we didn’t convert on. And that’s just what the situation was. So we addressed it and we moved on.”

Golladay’s hip injury bears close monitoring, meanwhile. Golladay missed the final nine games of the Detroit Lions’ 2020 season due to a Week 8 hip flexor strain that he aggravated while trying to come back.

Head coach Joe Judge, asked if it’s the same hip, said “no I don’t believe so.”

“We went through the whole hip [evaluation] in free agency,” he said. “I don’t think there’s anything that’s tied to anything [from last season] directly.”