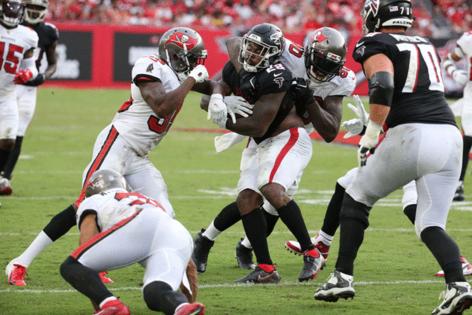 TAMPA, Fla. — There’s a reason the Bucs used their first-round pick on an outside pass rusher.

Jason Pierre-Paul, who led the Bucs with 9 1/2 sacks last season, will miss Sunday’s game against the Rams. Pierre-Paul, 32, has hand and shoulder injuries. He received a second opinion in Denver earlier this week and the treatment called for rest.

Fortunately, the Bucs have an explosive pass rusher in rookie Joe Tryon-Shoyinka, their first-round pick from Washington.

“Yeah, we got lucky with that one,” coach Bruce Arians said of Tryon-Shoyinka, “and a really damn good one.”

Arians said he doesn’t expect Tryon-Shoyinka to play perfectly Sunday in his start against the Rams.

“No, he’ll make some mistakes, but he’s going to make some things happen full speed, too,” Arians said. “And we’ve got all the confidence in Nelly (Anthony Nelson), too. Nelly is playing really, really well, too.

“As long as it’s full speed, good things sometimes happen. You try to eliminate as many (mistakes) as possible. But for him, good things can happen as fast as he goes.”

Arians said it is “very questionable” whether receiver Antonio Brown, who is on the reserve/COVID-19 list with linebacker Kevin Minter, will be able to play Sunday. “Kevin has got a closer chance,” Arians said.

A player needs two negative COVID-19 tests at least 24 hours apart in order to play. The Bucs travel to Los Angeles on Saturday afternoon. In two games, Brown has six catches for 138 yards, including a 47-yard touchdown from Tom Brady.

Kick returner/receiver Jaydon Mickens also won’t play Sunday due to an abdominal injury. He will be replaced by Jaelon Darden, the rookie from North Texas who will make his NFL regular-season debut.

If Brown is unable to play as expected, the Bucs don’t expect a huge dropoff. Receiver Scotty Miller, who has not been targeted in two games, made the biggest play of the year in the NFC Championship Game at Green Bay when Brown was out.

“I’m just really excited to go out there and get some opportunities, hopefully,” Miller said. “I always stay ready no matter what, because you never know when your opportunity is going to come. It could’ve come Week 1 or Week 2, but I didn’t happen to get a ball thrown my way. This week I’ll be ready, and if it does, hopefully I’ll be able to make a play.”

Miller said his connection with Brady is still strong.

“Yeah, the first two weeks I would still practice with Tom a decent amount,” Miller said. ”Our connection is great. Obviously, this year I got a whole lot more reps with him — deep balls and stuff.

“It’s the same thing as last year and the same thing when we got together at Berkeley (Prep) High School down here in Tampa. He does such a great job throwing the ball, he puts it on the money. I mean, he’s the best to ever do it, so it makes it easy for me and all of us.”

INDIANAPOLIS ― The Bucs looked like roadkill. They trailed the Colts by 10 points early in the second half and were retreating, on their way to another defeat as the visiting team.

They needed someone in a cape to save ...Read More

CINCINNATI — When the Bengals came into Pittsburgh and beat the Steelers by two touchdowns in Week 3, wide receiver Tyler Boyd said it looked like his hometown team was content to just “lay down” in the final minutes...Read More

MIAMI GARDENS, Fla. — The Dolphins took another step to becoming the team many envisioned they could be at the start of the 2021 season.

Led by a defense that limited the Carolina Panthers under 200 of offense and an ...Read More

HOUSTON — It was the definition of a team win for Gang Green. The offense was balanced, and the defense played lights out and the end result was a 21-14 win over the Houston Texans.

Zach Wilson had a pedestrian day in ...Read More