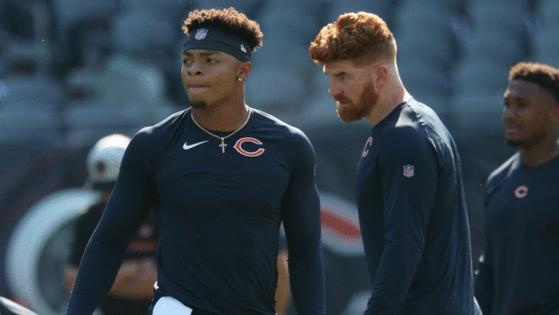 CHICAGO — Justin Fields will remain the starting quarterback for the Chicago Bears as long as his play warrants.

That’s not what coach Matt Nagy said Wednesday at Halas Hall in an impromptu media appearance. In fact, it contradicts his announcement that the first-round draft pick will start Sunday against the Cleveland Browns at FirstEnergy Stadium and will play until Andy Dalton can return from a left knee injury, reported by NFL Media to be a bone bruise.

Reality is Nagy doesn’t have to announce what everyone knows: Of course a player can lose his starting job because of an injury. To suggest otherwise is to ignore history in a league full of players who were replaced when they weren’t available and never got their jobs back.

More recently, Tony Romo’s back injury in 2016 pressed Dak Prescott into action for the Dallas Cowboys. Romo soon became one of the game’s best TV analysts, and Prescott has gone on to become one of the NFL’s highest-paid players.

So when Nagy says Dalton will be the starter again when he’s healthy, what he’s leaving out is that he would be nuts to remove Fields if the rookie is performing well.

Nagy declined to put a timetable on Dalton’s return, but it’s believed to be a multiweek injury. Nagy said he doesn’t think the 11-year veteran will be placed on injured reserve. That’s instructive from the standpoint that an IR stay would mean Dalton is out a minimum of three weeks. If the Bears don’t put Dalton on IR by 3 p.m. Saturday, that means they believe there’s a chance he could return in Week 5 against the Raiders in Las Vegas.

Indeed, a lot can happen between now and then, and Nagy provided more than enough to read between the lines: Fields is competing against himself to maintain the starting job.

If Fields plays lights out, it won’t be a question if Dalton will be the backup after he returns. If Fields shows promise while minimizing the mistakes inexperienced quarterbacks are prone to, Nagy can announce the Bears are sticking with the rookie. If Fields’ play is a little uneven and the coaching staff wants more time to evaluate him, Nagy can delay a decision by giving Dalton an extra week or two to heal than he might otherwise need.

Nagy said Dalton was playing well when he was injured in the second quarter Sunday. He led a 75-yard touchdown drive on the first series of the 20-17 win over the Cincinnati Bengals and completed 9 of 11 passes for 56 yards.

Everyone knows Fields is the future of the franchise, but a more than half a game Sunday plus five snaps in the opener have shown he’s a ways off from being steady. A couple of weeks of practice with the first unit could accelerate his development, and nothing will be more valuable than game reps.

It’s all up to Fields now and how the Bears coaches prepare him on a weekly basis.

“Of course it sucks for it to happen like this,” Fields said of getting his first start because of a teammate’s injury. “But I believe everything happens for a reason, so we might not know what that reason is now. I guess we’ll find out as time goes on.

“My main focus isn’t winning the starting job. I think that’s going to come with time. My main focus right now is just to prepare the best I can and go out Sunday and execute at a high level.”

If Fields executes well with his opportunity, Nagy won’t have to explain the depth chart. Sometimes the truth hurts as much as physical anguish. Players can certainly lose their jobs because of injuries.