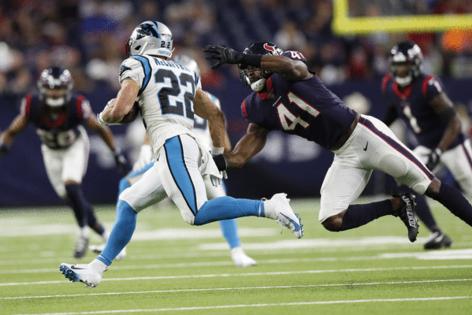 HOUSTON — Carolina Panthers running back Christian McCaffrey has been ruled out of Thursday night’s game with a hamstring injury.

McCaffrey suffered the injury in the second quarter against the Texans. A replay showed him pull up as he ran for a two-yard gain with 12:13 left before halftime.

McCaffrey immediately went to the team’s medical tent to be looked at by a trainer. He did not emerge from the tent for 22 minutes before heading back to the locker room.

That McCaffrey was ruled out so quickly is a cause for concern. At the time he went out, the Panthers led the Texans 7-0.

The star running back missed a portion of the Panthers’ game against the Saints last Sunday after dealing with cramps. He went back to the locker room to get an IV, but returned in the fourth quarter and played the rest of the way.

His high usage has been a topic of discussion for years. He’s the Panthers’ go-to player in the passing and running game, and he missed 13 games last season after dealing an AC joint injury, a high-ankle sprain and a quad injury.

Through the first two games this season, he had 59 touches. Before the injury, he had nine touches on Thursday (7 carries for 31 yards, 2 catches for 9 yards). The Panthers will likely continue to use rookie Chuba Hubbard in his place.