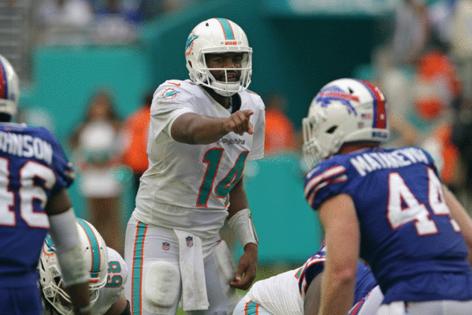 Ever had a fridge full of leftovers nobody wanted to eat?

There’s absolutely nothing wrong with any of those meals. They were nutritious, and even delicious earlier in the week. Warm them up one more time, and they should satisfy your hunger.

But that doesn’t stop you from ordering takeout because you desire something fresh, new and more enticing.

Jacoby Brissett, who owns a 12-20 record as a starter, is a leftover NFL quarterback. Just like the pot roast and pork chops sitting in the back of my fridge, there’s nothing wrong with him.

The six-year veteran is more than capable of carrying the Miami Dolphins while Tua Tagovailoa spends the next few weeks recovering from the rib injury he suffered in Sunday’s 35-0 loss to the Buffalo Bills.

The former Palm Beach Gardens Dwyer standout, a third-round pick by the New England Patriots in 2016, has started 32 of the 51 NFL games he’s played in during his career.

Starting 32 NFL regular-season games, which equated to two seasons before the league went to 17 games this year, is no easy task.

Only Carson Wentz, Jared Goff and Dak Prescott have started more games as members of that 2016 quarterback draft class.

Josh Rosen, a 2018 first-round pick who the Dolphins foolishly traded for in 2019, has started just 16 games.