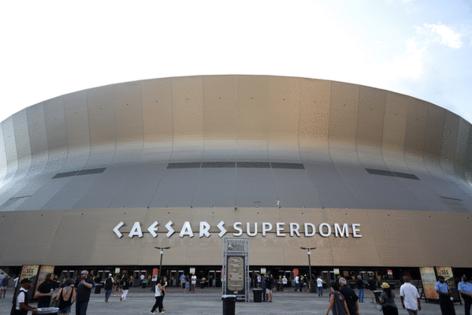 A fire broke out Tuesday on the roof of the Caesars Superdome in New Orleans, injuring one person.

Flames and black smoke were visible on top of the massive football stadium around 12:30 p.m. The source of the fire appeared to be inside the stadium, according to Fox 8.

The fire was extinguished and the smoke turned a lighter color within an hour.

New Orleans Emergency Management Services said that they were transporting one person to the hospital for “minor burns.”

The cause of the fire is under investigation, but workers with pressure washers were seen on the roof earlier. Cleaning and renovations of the roof (which rebranded this year from Mercedes Benz to the casino giant, Caesars) had only recently resumed following Hurricane Ida. The stadium had not been damaged in the storm.

An employee told WDSU that about 70 workers were evacuated from the roof and inside the stadium around 12:40 p.m. as a precaution but that no one smelled smoke prior.

The cause of the fire was later revealed to be a pressure washer that caught fire.

“This afternoon a fire occurred on the exterior of the Caesars Superdome in the gutter tub of the roof,” ASM Global, which manages the stadium, and the LSED said in a joint statement. “NOFD and venue first responders were dispatched immediately and extinguished the fire. Upon further investigation it appears that a pressure washer being used to clean the roof caught fire. Damage is still being assessed.”

The Saints have not played at the stadium yet this year, but are scheduled to host the New York Giants on Oct. 3.