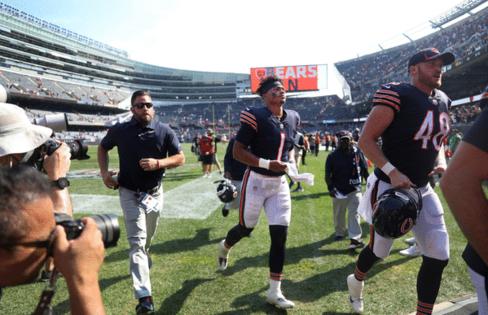 Here are my best bets off the waiver wire for Week 3:

— QB Justin Fields, Bears (ESPN: 48%; Yahoo: 51%): I advised you in this space last week, if Fields was available in your league, to add him. Consider this last call. Andy Dalton didn't suffer a torn ACL against Cincinnati, but it appears likely the rookie will start this week at Cleveland and it will be hard for Matt Nagy to turn back once Fields sees extended playing time. The first-round draft pick will have a high floor once he gets on the field full-time thanks to his rushing ability.

— WR Rondale Moore, Cardinals (ESPN: 19%; Yahoo: 34%): I wrote last week: "The rookie has the highest upside of any Cardinals wide receiver not named DeAndre Hopkins." Through two weeks, Moore is WR19 in standard formats and WR17 in PPR. Invest now.

— RB Tony Pollard, Cowboys (ESPN: 39%; Yahoo: 54%): Pollard has been a top-12 option at running back through two games. His talent and versatility has earned him significant touches and he will be a priority flex option most weeks, but pump your breaks if you think he's replacing a healthy Ezekiel Elliott.

— TE Jared Cook, Chargers (ESPN: 52%; Yahoo: 43%): Cook's usage was identical to Week 1 even if the production fell short against the Cowboys. His 13 targets are tied for sixth (with Rob Gronkowski) among all tight ends, so that in itself is a strong enough reason to roster Cook.

— WR Darnell Mooney, Bears (ESPN: 49%; Yahoo: 45%): Mooney leads the team in target share and is currently on pace for 88 receptions. He has already earned flex consideration in PPR, but his fantasy stock will skyrocket with Fields under center.

— BONUS: QB Daniel Jones, Giants (ESPN: 11%; Yahoo: 20%): Jones is currently QB5 in fantasy on the strength of his legs — he's produced 122 yards and two touchdowns on the ground. That's an enticing floor to consider and I expect many to invest with a matchup against Falcons at home this week.