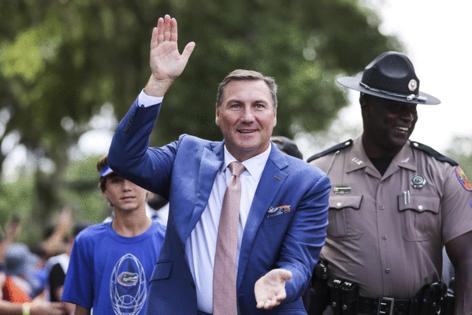 “If they want to give me a mic pregame, I’ll go sing or do a little dance routine,” Mullen joked Monday. “Whatever we need if it’ll help people come. I’ll do what we need.”

Rather than fine-tune his vocal cords, Mullen will push his 11th-ranked team to improve its performance after Saturday’s close-call against Alabama. Rival Tennessee is up next at 7 p.m. Saturday night.

Mullen want fans are to play a big role again after a virtuoso effort during a 31-29 loss to the top-ranked Crimson Tide at sold-out Ben Hill Griffin Stadium.

“All the Gator fans need to go maybe get some warm tea and lemon, make sure their throats are refreshed,” Mullen said. “We need an even more raucous environment to continue to give the home-field advantage. I think you saw the effect that had on the game last week.”

With a reported crowd of 90,887 on hand, the Gators fought back from an 18-point deficit, pushed around the defending champions at the line scrimmage and had a chance for an upset as a two-touchdown underdog.

“It’s something we love and feed off of. We love to play in that environment.”

Jones also noted the confusion the crowd causes for opponents.

Alabama, now winners of 17 straight, suffered four false-start penalties and a delay of game as the din from the crowd rained down on coach Nick Saban’s team.

Prior to Saturday, Mullen had felt the power of the Swamp many times, just not quite as much recently as he’d like.

During Mullen’s four seasons (2005-08) as Urban Meyer’s offensive coordinator, the Gators exceeded the 90,000 threshold at the 88,548-seat Swamp during all 27 home games, losing just twice. Alabama’s visit marked only the third of 15 home games not impacted by COVID-19 with at least 90,000 fans under Mullen.

Sellouts are increasingly rare across college football because of high-definition, big-screen TVs, the traffic, parking and long lines at the stadium and travel challenges during a pandemic.

SEC schedule-makers could help at the turnstiles.

Mullen might be the only coach asking to play Alabama more, but said fans want to see a variety of opponents.

“If you look at, probably the two biggest crowds I’m guessing since I’ve been here were Alabama and Auburn,” Mullen said. “They’re the two least teams that come here the least. That’s the ticket that people want. So if we rotate it more, you see more flexibility within the scheduling.

“It’s certainly going to help attendance and excitement and an interest in the games.”

This applies not just to those supporting the home team.

“Maybe what pushes it over the top,” Mullen said, “is there a lot Alabama fans because they haven’t been to the Swamp in a long time — they come as well.”

For now, Mullen is pushing for another sellout when 11th-ranked Florida (2-1, 0-1 SEC) hosts Tennessee (2-1, 0-0). The Gators-Vols matchup has delivered plenty of drama and high decibel levels at the Swamp, including during Antonio Callaway’s winning touchdown on fourth down in 2015 and Feleipe Franks’ Hail Mary toss to end a 2017 thriller.

“That’s got to be just fun to even be in that environment, that energy, that excitement, that everybody just feels that while they were there,” Mullen said. “There’s passionate Gator fans out there and I think they need to understand that they are critical in the success of this team. They have an important role.

“Obviously, last Saturday was a crazy environment. We need to keep that going. It does nothing but help.”

Game-changing backup quarterback Anthony Richardson could have played against Alabama, but Mullen was not ready to risk further injuring Richardson’s right hamstring.

Richardson’s ailment and availability consumed Gator Nation’s attention leading up to Alabama’s visit and will be watched closely this week.

After straining his hamstring during an 80-yard run Sept. 11 at USF, Richardson practiced some last week. He then underwent an MRI Friday revealing surprising progress.

Expect Richardson’s workload to increase this week, potentially give the Gators a change of pace at QB and big-play threat. Richardson has accounted for touchdowns runs of 80 and 73 yards and scoring passes of 75 and 41 yards during just eight series.

“In meeting with the medical staff,” Mullen said, “there was a pretty solid feeling if he didn’t play in the game, we continue, we’re ahead of where we were, that he would be 100% by this Saturday.”