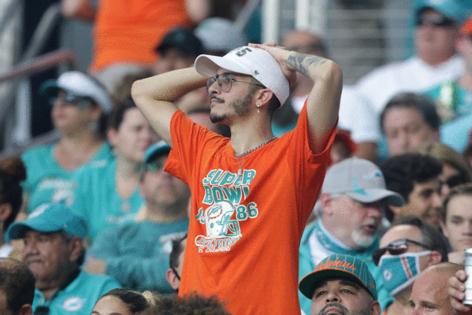 If you want to know where to look after the worst Sunday of this three-year Dolphins era, here’s the idea: Look up.

Don’t look down. Don’t look at the players losing 35-0 Sunday to Buffalo. Don’t always blame them for being who they are, for doing what they do — for being here at all.

Take the Sunday of those three heralded, first-round picks of the 2020 draft: Quarterback Tua Tagovailoa was hurt; left tackle Austin Jackson was called out by coach Brian Flores for dismal play. and cornerback Noah Igbinoghene was inactive again.

Individualy, there are issues. Collectively, they make you review this rebuild from top to bottom – not bottom to top. The attention turns back to General Manager Chris Grier and the decisions in stocking this roster.

In Year 3, the clock is ticking on the young players accumulated by purposely losing and by trading Pro Bowl tackle Laremy Tunsil and All-Pro safety Minkah Fitzpatrick.

Is there a young offensive lineman approaching Tunsil’s talent among the big handful of draft picks used? Is there a talent anywhere close to Fitzpatrick? Where’s some quid-pro-bowl-quo in these deals?

Two games into a season isn’t a time for conclusions. But two games can suggest what’s right or wrong. They can provide a compass point to where things are headed without change.

Those numbers, again, aren’t final. But they don’t lie. Something is desperately amiss even in a 1-1 start. Are we right back where we were four seasons ago, “Groundhog Day”-style, when coach Adam Gase was fired with the 31st-ranked offense?

Sunday showed just how far the Dolphins still are from where this makeover plotted to be, too. Because of what they’ve expended and the timeline they’re on, this Buffalo loss was worse than the 59-10 beatdown by Baltimore to kick off this rebuild in 2019.

SANTA CLARA, Calif. — The rain kept falling Sunday night, symbolically escorting the 49ers to a fourth straight loss that has their season in an embarrassing freefall.