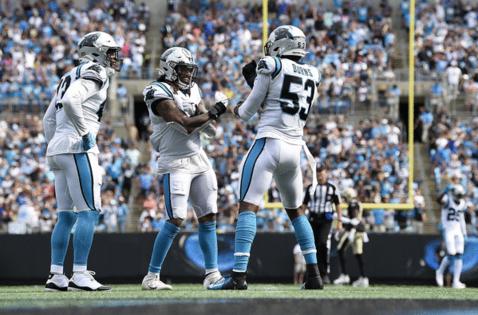 CHARLOTTE, N.C. — If the Panthers were going to be a playoff team this year, they needed to fix their pass rush.

Brian Burns was one of the few players getting after opposing quarterbacks last season, and when teams did finally figure that out, they doubled him.

But it appears the Panthers have found a solution.

For the second consecutive week, the Panthers got after the opposing quarterback. Last week, it was Jets rookie Zach Wilson. This week, it was the Saints’ Jameis Winston in a 26-7- win.

The Panthers sacked Winston four times and tallied four more quarterback hurries. The pressure also caused him to throw two interceptions — once in the second quarter and another in the fourth. Both were attempts to just avoid a sack and neither had a chance to end in a completed pass.

And this was a week after the Saints didn’t allow a single sack against the Green Bay Packers in their 38-3 win. It was an impressive performance by a Panthers team, that just last year, was one of the worst teams in the league in generating pressure.

The Saints have the defense and offensive line to be a playoff team when healthy — and they showed that against the Packers in Week 1. But Sunday, they were dominated on both sides of the ball, falling out of a tie for first place in the NFC South, a spot that, for now, belongs in part to Carolina.

“Yeah. Facts,” Burns said Sunday evening when asked if the Panthers were a playoff team. “I believe in these guys. I believe in myself.”

New Orleans was without eight starters Sunday. Among them were defensive backs C. J. Gardner-Johnson and Marshon Lattimore, who were announced as inactive shortly before kickoff. Star wide receiver Michael Thomas also missed the game, leaving Winston without a go-to target under pressure.

Winston, in his first season as the starter in New Orleans, taking over for the retired Drew Brees, completed 11 of 22 passes for 111 yards and rushed for the Saints’ lone score. Last week, he passed for five touchdowns.