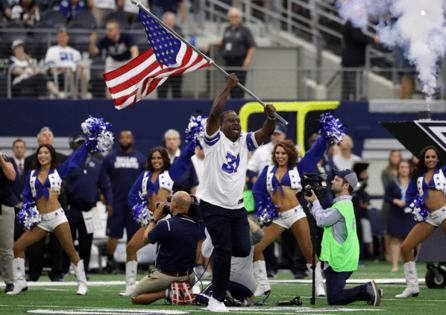 FORT WORTH, Texas — As rapper Nicki Minaj tweets her "medical expertise" against the COVID vaccine, former NFL players came to downtown Fort Worth Saturday in an effort to support the global effort to get the shot.

As Black Americans, they all get it. They are all acutely aware of the history — and the well-documented horrors — between America's medical professionals and many members of the Black community.

They are all aware of the trepidation, fears, paranoia and concerns that many of their own family members, friends and loved ones have expressed about this new vaccine. And as the number of COVID-19 fatalities in the United States (673,000 as of Sept. 18) is poised to eclipse the estimated 675,000 American deaths from the last century's pandemic, those who feel they can make a difference now have felt compelled to step forward.

That's why so many former NFL players were in downtown Fort Worth at medical tents staffed with nurses on Houston Street.

To plead not only with their own fellow NFL alumni, but to those who are still so reluctant to take this vaccine.

"It's some information from somewhere, or somebody, or some website, offering what they perceive as truth. Especially in the Black community," former Dallas Cowboys safety George Teague said. "I'm not saying I agree with it, but I am saying I understand it."

Trepidation and concern over the COVID vaccine is not endemic to the Black community in the United States. Since the spring, the percentage of American adults who say they will not get vaccinated has ranged from about 20 to 30 percent. According to the 2020 U.S. Census, about 14 percent of Americans identify as Black, either wholly or partially, making this more than just a Black issue.

Guys like Teague and former NFL player Liffort Hobley are actively trying to help convince their family, friends and others in their community to listen to people other than the Nicki Minajs of the world.

Teague admits he was not "all the way up" for taking the shot in the beginning. He questioned the safety of the new vaccines that were produced so quickly. But as more information and study findings became available — along with FDA approvals — his concerns faded.

Now he's trying to convince people to get vaccinated.

Nevertheless, the savvy veteran was still called on in ...Read More

NEW YORK — This is probably why Joe Judge asked Jabrill Peppers to break the Giants down after Sunday’s win over the Panthers:

Peppers ruptured the ACL in his right knee and is done for the season, the team announced ...Read More

FRISCO, Texas — Life has not been easy for Dallas Cowboys quarterback Dak Prescott, who missed 11 games last season with a fractured ankle, missed all of the preseason with a strained shoulder and now is dealing with a ...Read More

Kennedy was sitting in the front row behind the end zone at Raymond...Read More

Kyle Shanahan on Monday, hours after the 49ers dropped their fourth straight game, announced Jimmy Garoppolo is expected to remain the team's starting quarterback this week against the Chicago Bears.