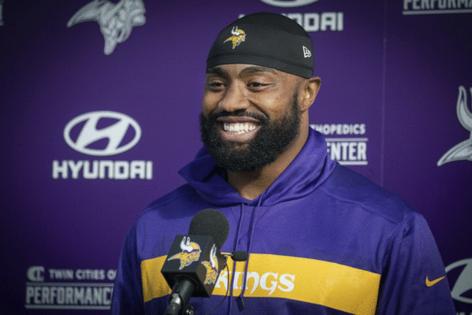 MINNEAPOLIS — Defensive end Everson Griffen, one of four Vikings ruled out of Sunday's game at Arizona, was involved in a car accident while swerving to miss a deer en route to TCO Performance Center on Thursday morning, coach Mike Zimmer said on Friday.

Linebacker Eric Kendricks (quadriceps) was listed as questionable but should play, Zimmer said.

Griffen, who suffered a concussion in the accident, had one pressure and a near sack while playing 28 snaps in last week's loss at Cincinnati. His absence will mean more snaps for fellow backup Stephen Weatherly, who has been praised by coaches this week. Weatherly had three tackles in only 17 snaps against the Bengals.

"Last week, I thought he played well," Zimmer said. "Played with physicality. I thought he did some good things."

Typically, Barr would be assigned to spy a mobile quarterback such as Arizona's Kyler Murray. Asked what they'll do this weekend, Zimmer said, "We'll have different people" do it.

Barr will be missing his 16th consecutive game. He suffered a torn pectoral muscle in Week 2 a year ago.

Kendricks should be fine

Kendricks didn't appear on the injury report until Thursday. Asked if he suffered the injury in practice or if this was a lingering issue from last week's game, Zimmer said, "No." Then he paused, chuckled and said, "He just got a tweak."

Zimmer has been using the word "tweak" as a punch line because of the grief he's taken the past year for using that term to describe the neck injury that eventually cost defensive end Danielle Hunter the entire 2020 season.

Linebacker Nick Vigil (ankle) also was on the injury report this week but will play Sunday.

The Vikings had no power Friday. Literally.

The strong storms that swept through the area overnight knocked out the electricity throughout Eagan, including the Vikings practice facility.

"Like all things that happen during the season, we had to make some adjustments here today," Zimmer said. "We had no electricity in the building so we moved practice up. We had meetings like the old school with chalkboards and white boards. We'll catch up on the film [Saturday] morning when we get back for meetings."

Asked if there were any backup generators at TCO, Zimmer said, "Basically, no. Had to take a shower in the dark. … You can't make it up. But, hey, we're survivors."