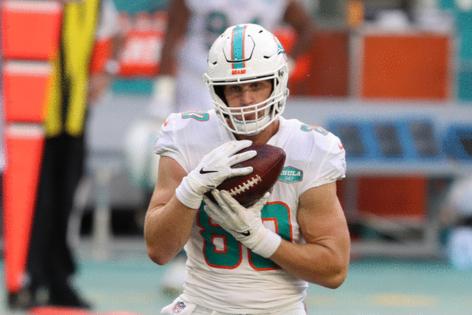 MIAMI GARDENS, Fla. — Miami Dolphins tight end Adam Shaheen was short and to the point when asked if he regretted going without a COVID-19 vaccine ahead of the season.

“No, not at all,” said Shaheen after a positive COVID-19 test on Sept. 6 put him on the reserve/COVID-19 list and caused him to miss the Dolphins’ 17-16 season-opening win against the New England Patriots.

Shaheen, the team’s No. 2 tight end behind Mike Gesicki, was activated off the COVID-19 list on Wednesday ahead of Sunday’s game against the Buffalo Bills. He said he never experienced any symptoms while he went through the 10-day quarantine the NFL mandates for unvaccinated players who test positive.

“It sucked,” Shaheen said. “I had nothing, so it was just sitting and being in quarantine. I knew I was positive, so it wasn’t like I was going and doing anything. I was getting food. It sucks because I was fine and able to be out there, but it is what it is.”

He said he watched the Dolphins’ AFC East road win both as a fan cheering on his teammates and also with an analytical view of what he would do if he was out there.

Shaheen’s status may have been in doubt last Sunday regardless of the positive test as he was recovering from a knee injury sustained late in training camp. He was a limited participant in his first practice since being activated off the COVID-19 list on Wednesday and participated fully in Thursday’s drills.

Fellow tight end Durham Smythe is also happy to have Shaheen back.

“It’s always good to be back at full strength,” Smythe said. “I think we all have our roles that we’re kind of ingrained in when everyone’s healthy, so we’ll get back to those and get back to our status quo. It’s good to have him because he’s another ear and another body.”

With Shaheen absent and despite Gesicki being healthy, Miami ran Smythe onto the field much more than the starter Gesicki. Smythe had 38 offensive snaps on Sunday to Gesicki’s 21.

Gesicki said Thursday he was happy the Dolphins got the win despite his lack of playing time after he had 703 receiving yards and six touchdowns as Miami’s top tight end in 2020.

Brown in the Wildcat

When Dolphins fans think of a running back named Brown taking Wildcat snaps in New England, they must reminisce about Ronnie Brown giving the Patriots’ defense fits in 2008, when he ran for four touchdowns and threw for another in a 38-13 win that introduced the Wildcat formation into the league.

In Sunday’s win at Gillette Stadium, it was Malcolm Brown that got multiple direct snaps in the backfield against Bill Belichick’s defense. While he didn’t dominate nearly like Ronnie Brown did in 2008, Malcolm Brown picked up a first down in the opening drive of the second half in the red zone that set up the Tua Tagovailoa touchdown pass to Jaylen Waddle. He later picked up another first down in the formation when the Dolphins ran the clock out with the lead at the end.

“Definitely haven’t done it in a long time,” said Brown on Friday, adding he ran the Wildcat some in college at Texas. “For the coaches to put me in that position, definitely thankful, grateful for that. It was fun, exciting and definitely looking forward to some more hopefully.”

Brown said the plan was put in his ear in the two weeks before the game and it was practiced in the week leading up to the game. He would not reveal if it would remain a part of the game plan moving forward.