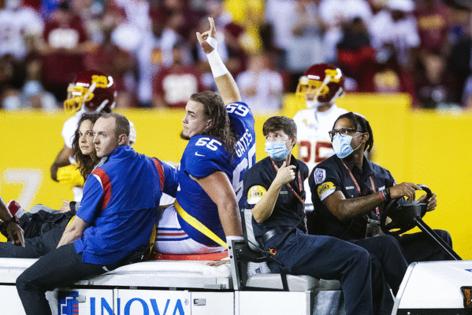 Gates, the team’s starting center, started at guard in a new plan to help the O-line and the offense. But then he fractured his lower left leg on the first play of the second drive.

Gates was twisted down to the ground awkwardly by Washington D lineman Jonathan Allen and simultaneously rolled up on by D-lineman Daron Payne.

The injury required the attention of at least 10 doctors, trainers and staff members on the field. The entire Giants sideline came out onto the field to wish Gates well before he was carted off.

Gates, 25, waved to the crowd as he was carted to the locker room, but his injury is a huge loss for an offensive line that was already in flux.

Gates’ start at guard was just the second of his career and the first since Week 15 of the 2019 season, a win over the Miami Dolphins in Eli Manning’s final appearance.

He was replaced after the injury by Ben Bredeson. Billy Price also made his first Giants start at center, putting both recent trade acquisitions in the heart of Thursday night’s effort.

Gates is signed through the 2022 season. The Giants initially signed him as a tackle out of Nebraska as an undrafted free agent in 2018.

But that will be the last on-field work Wilson gets for a few weeks. ...Read More

Jones practiced in full Friday morning and was cleared from the concussion protocol in the ...Read More