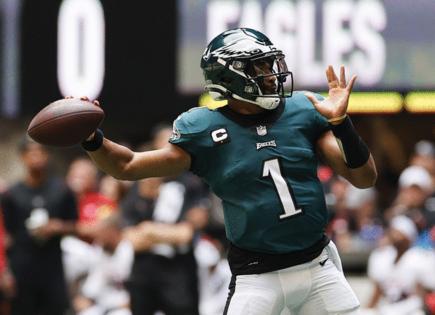 Here's a look back at Week 1's action, and fantasy advice for the week ahead:

Buccaneers 31, Cowboys 29: I feel like I don’t need to remind those who have played fantasy football before not to overreact after the first week. We’re all known for being cool, calm and collected at all times. Wait, what? We’re not? We’re actually loose cannons who probably need to visit a rage room. Yeah, that sounds about right. Take a breath and repeat after me, “Ezekiel Elliott is going to be fine.”

Eagles 32, Falcons 6: Kyle Pitts will never be cheaper. Pitts’ debut was relatively quiet — 31 yards on four receptions — but he had eight targets, which is impressive for a rookie tight end. See if you can trick someone into trading you the No. 4 overall pick for 75 cents on the dollar.

Steelers 23, Bills 16: It’s very rare these days for any running back to play 100% of any team’s snaps, and Najee Harris did it in his first game. The big season most of us expect from the rookie has moved from possible to probable.

Bengals 27, Vikings 24 (OT): Exhibit A for why you take preseason results with a grain of salt when it comes to fantasy: Ja’Marr Chase (101 yards on five receptions, including a 50-yard touchdown).

49ers 41, Lions 33: Write this down: Any running back that suits up for a head coach with the last name of Shanahan has potential value in fantasy.

Cardinals 38, Titans 13: Temper your expectations after Christian Kirk’s big opener (70 yards on five receptions and two touchdowns). We’ve been fooled before and I still believe rookie Rondale Moore has the highest upside in Arizona’s offense outside of DeAndre Hopkins.

Seahawks 28, Colts 16: If you thought Carson Wentz wouldn’t target his running backs the way Philip Rivers did last season, you were wrong. Nyheim Hines (8) and Jonathan Taylor (7) finished first and second in targets and both had six receptions. Hines can be counted on to produce flex value in PPR formats on a weekly basis.

Chargers 20, Football Team 16: Rookie Larry Rountree clearly earned the backup spot to Austin Ekeler, which means eight-to-12 carries per game and some potential for goal-line opportunities (where he excelled in college).

But that will be the last on-field work Wilson gets for a few weeks. ...Read More

Jones practiced in full Friday morning and was cleared from the concussion protocol in the ...Read More