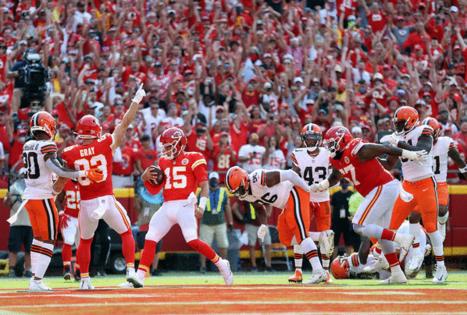 We were all flying blind last week. That includes the oddsmakers who set the lines that instigate a million bets. Twelve underdogs covered the point spread, the most in Week 1 in the entire Super Bowl era. And nine of those dogs won outright — the most in any week in four years. Given all that, I feel almost OK to have come out of Kickoff Weekend 8-8 overall, especially with two of my L’s coming in overtime. And our 9-7 mark against the spread might have merited a doggone parade! Highlights: Nailed two of my three outright upset picks, including my Upset of the Week (Texans over Jaguars) and the Dolphins (+3) winning at New England. Also had a trio of ‘dogs-with-points smile upon me with covers by the Browns, Steelers and Cardinals. Now there’s some tangible Week 1 evidence in the pocket as we foray into Week 2. Let’s see how much it helps. [Note: Thursday night pick was @Washington (-3 1/2) over Giants, 19-17.]

GAME OF THE WEEK

Full transparency: My initial gut feeling was an upset here. Crows shocking the world in their home opener in prime time Sunday. How ‘bout that!? Then reality set in. Baltimore’s defense gave up 435 passing yards to Derek Carr last week, and now here comes the unstoppable triumvirate of Patrick Mahomes, Tyreek Hill and Travis Kelce. And KC in four straight wins over BAL has had Lamar Jackson’s number, period. And Ravens have only covered once in past six home games vs. Chiefs. Did I mention the Mahomies are on a 10-1 run away from Arrowhead? Still give Baltimore an upset shot. Wouldn’t bet on it, though.

TAMPA, Fla. — A few weeks ago, the Bucs seemed to have little interest in delving too deeply into the issue of fake vaccination cards. Not even — or especially even — in their own locker room.

MINNEAPOLIS — In his first public comments since he was taken by ambulance for mental health treatment on Nov. 24, Vikings defensive end Everson Griffen announced on social media that he has been living with bipolar ...Read More

To assess that, we compared Tagovailoa’s statistics in his ...Read More